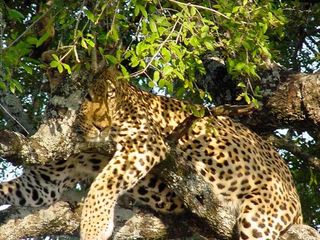 Leopards are big cats known for their golden, spotted bodies and graceful, yet ferocious hunting techniques. They are often thought of as an African animal, but leopards live all over the world. Though their reach is vast, their numbers are declining.

The leopard is very adaptable and can live in many different places across the globe. Leopards are found in sub-Saharan Africa, the Arabian Peninsula, southwestern and eastern Turkey, in the Sinai/Judean Desert of Southwest Asia, the Himalayan foothills, India, Russia, China and the islands of Java and Sri Lanka, according to the International Union for Conservation of Nature (IUCN). These large cats can live in almost any type of habitat, including rainforests, deserts, woodlands, grassland savannas, forests, mountain habitats, coastal scrubs, shrub lands and swampy areas. In fact, leopards live in more places than any other large cat.

Leopards are solitary creatures that only spend time with others when they are mating or raising young. They are also nocturnal and spend their nights hunting instead of sleeping.

Leopards spend a lot of their time in trees. Their spotted coat camouflages them, making them blend in with the leaves of the tree. They will often drag their prey into trees to keep it from being taken by other animals, according to National Geographic.

Leopards are carnivores, but they aren't picky eaters. They will prey on any animal that comes across their path, such as Thomson's gazelles, cheetah cubs, baboons, rodents, monkeys, snakes, large birds, amphibians, fish, antelopes, warthogs and porcupines.

Leopards are ambush predators; they crouch low to sneak up to their prey and pounce before it has a chance to react, according to the Animal Diversity Web, a database maintained by the Museum of Zoology at the University of Michigan. A leopard will kill its prey with one swift bite to the neck, breaking it.

Leopards have a gestation period of approximately three months and typically give birth to a litter of two to three cubs in a den, according to PBS Nature. Each cub weighs just 17 to 21 ounces (500 to 600 grams) at birth, is blind and almost hairless. They depend on their mother for food and do not leave the den until they are 3 months old. At 12 to18 months, the cubs are ready to live on their own and at 2 or 3 years old will create their own offspring. Leopards live 12 to 15 years in the wild and up to 23 years in zoos.

Leopard characteristics are recognized in their classification as catlike carnivores (suborder Feliformia) and as roaring cats (genusPanthera). Their complete taxonomy, according to the Integrated Taxonomic Information System (ITIS), is:

Leopards are classified as near threatened by the IUCN's Red List of Threatened Species. This listing is due to their declining population, which is caused by habitat loss and hunting. According to PBS Nature, one of the rarest leopards is the Amur leopard, which is found in far-east Russia, Korea and northeast China. It is estimated that there are only 30 currently living in the wild.

The name "leopard" comes from the Greek word leopardus, which is a combination of leon (lion) and pardus (panther), according to PBS Nature.

Leopards don't need much water. They survive from the moisture they get from eating their prey.

Though classified as a roaring cat, leopards usually bark when they have something to say.

The leopard's spots are called rosettes because they look like roses.

The genus Leopardus does not include leopards. Members of that genus include cats of Central and South America, such as ocelots, oncillas, margays, Pampas cats, Geoffrey's cat, guiñas and Andean cats.