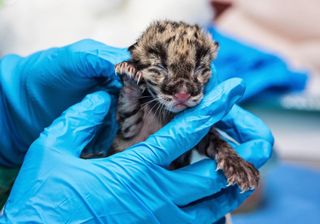 The cub is the first clouded leopard to be born from an artificial insemination procedure using cryopreserved (frozen, then thawed) semen.
(Image: © Amiee Stubbs/Nashville Zoo)

A rare clouded leopard cub was born at the Nashville Zoo this week, making history for the vulnerable species.

The clouded leopard is one of the rarest cat species in the world, according to the Smithsonian's National Zoo and Conservation Biology Institute, and the cat is difficult to breed in captivity. The as-yet-unnamed male cub is the first clouded leopard to be born from an artificial insemination procedure using cryopreserved (frozen, then thawed) semen. The cat's birth is part of conservation efforts by the Nashville Zoo and the Smithsonian to protect the species.

The cub was born on Wednesday (March 1) to Tula, a clouded leopard that was born and raised at the Nashville Zoo. Hormones were used to induce Tula's ovulation, the zoo explained, and her eggs were fertilized with semen that had been taken from the male clouded leopard at Smithsonian's National Zoo, named Hannibal. [Photos: World's Cutest Baby Wild Animals]

"This is an enormous accomplishment for both Nashville Zoo and the team at the Smithsonian," Heather Robertson, director of veterinary services at the Nashville Zoo, said in a statement. "It means we can collect and preserve semen from clouded leopard populations around the globe and improve pregnancy outcomes from AI [artificial insemination] procedures in this species."

Though the name might suggest otherwise, the species is not actually a leopard. In fact, the cats belong to their own genus, Neofelis. Clouded leopards are smaller in stature compared to their namesake, and the Smithsonian describes the species as bridging the gap between big cats, like lions and tigers, and smaller cats, like lynx.

With the success of this new cub's birth, breeding facilities like the Nashville Zoo will continue to work with artificial insemination specialists to expand the population of clouded leopards, according to Smithsonian officials.

After the new cub's birth, keepers examined and tended to it, including teaching it how to raise its paws. According to zoo officials, this paw-raising will lower the cub's stress for future hands-on care as the baby is raised at the zoo.