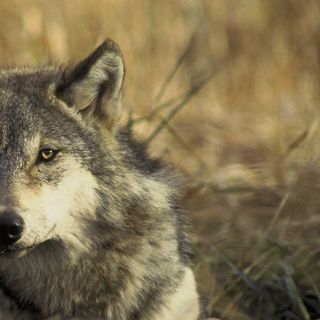 Critics of the proposal to delist gray wolves argue that the decision is premature. They say stripping wolves of their federal protections could hurt the animals' chance of recolonizing other parts of their historic range, such as Colorado and Utah.
(Image: © U.S. Fish and Wildlife Service)

WASHINGTON — In passionate and at times tearful testimony at the U.S. Department of the Interior Monday night (Sept. 30), Americans who say they have admired, studied, defended and even kissed gray wolves offered a plea to federal officials: Don't take the animals off the endangered species list.

The U.S. Fish and Wildlife Service wants to lift federal protections for all gray wolves in the continental United States, except for a struggling population of a subspecies, Mexican wolves, found in the Southwest. The agency argues the threat of extinction has been eliminated; wolves' numbers have bounced back to healthy levels and have even surged beyond recovery goals.

But critics, including several biologists, say the move is premature. They are concerned that the proposal would result in more aggressive management tactics and hunting policies, and could hurt the species' chances of recolonizing other parts of their historic range. Some scientists wonder if the battle raging over wolves stems from greater confusion about how to define recovery and deal with threatened wildlife in the United States — especially species as storied and controversial as the wolf. [See Amazing Photos of Gray Wolves]

From hated to hallowed species

A century ago, the gray wolf was so universally reviled that even conservationist William Hornaday wrote, "Of all the wild creatures of North America, none are more despicable than wolves."

"No animal engenders more polarizing emotion amongst Americans than does the wolf," Dan Ashe, head of the Fish and Wildlife Service, told reporters in a firm defense of the proposal ahead of the agency's public hearing. "We see powerful emotions on both sides of this debate. But I think, regardless of our positions, I think we all can recognize recovery of the wolf is one of the greatest conservation success stories in the history of our nation."

Before the arrival of European settlers, wolves once occupied nearly all of the lower 48 states, expect for a swathe of the Southeast, but their numbers plummeted due to hunting. Wolves killed livestock and game, and bounties were awarded for their carcasses. By the mid-20th century, the gray wolves in the continental United States were confined to a sliver of northern Minnesota and Michigan's Isle Royale.

The environmental movement of the 1960s and 1970s marked a major turnaround for the animals. Though some state and federal measures had already offered protections to wolves, the predators received the most sweeping safeguards under the Endangered Species Act in 1978.

In the decades that followed, recovery and reintroduction programs — including the iconic release of wolves in Yellowstone National Park — helped to establish breeding populations below the Canadian border. Today, there are more than 5,000 gray wolves in the nation, primarily in the western Great Lakes states of Michigan, Minnesota and Wisconsin, and the northern Rocky Mountain states of Idaho, Montana and Wyoming, as well as eastern Oregon and Washington. [Photos: The Wonders of Yellowstone National Park]

As wolves have recolonized parts of their historic range, their public image has also enjoyed a revival.

"The Endangered Species Act has accomplished two things — two miracles really — a biological miracle and a social miracle in really getting people to think differently about wolves in the American landscape," Ashe said.

A more sympathetic view of wolves was on display during the dozens of two-minute public testimonies presented Monday night. One woman choked up as she pondered the kind of world her 2-year-old granddaughter would inherit: "I never want to have to tell her that wolves have gone the way of the Mexican grizzly bear, no longer in existence in the Southwest, because humans have killed every last one of them."

Another citizen, Christie Wagner, recommended worried ranchers get a Hungarian Komondor dog to keep gray wolves away from livestock. Wagner offered anecdotal evidence to argue that fear of the predators is "absurd."

"I personally kissed two gray wolves on the mouth and greeted them in their manner by gently biting them on each side of the snoot. I still have my face," Wagner said in her testimony. "However, I've been attacked by a Chihuahua for just walking past it."

Throughout the testimonies, wolves were praised for their beauty, intelligence and importance to the nation's heritage. Many speakers touched on wolves' biological significance as apex predators that can exert a top-down influence on ecosystems, affecting everything from the behavior of elks to the growth of trees and the diet of bears. [In Images: 100 Most Threatened Species]

Advocates fought to keep gray wolves protected as endangered species in those areas, but after several legal battles and eventually congressional intervention, conservation and management efforts were handed over to state officials by 2012. Now states like Wisconsin and Montana have established wolf-hunting seasons, in part reasoning that hunting would improve tolerance for the controversial species. But surveys have shown that tensions over wolves remain high.

A recent study by researchers at the University of Wisconsin-Madison showed that the state's first wolf hunt last year did not increase tolerance toward the animals. In 2009, 51 percent of those living in wolf country said they would be more tolerant of wolves if they could hunt them, but a follow-up survey in 2013 found that 81 percent of residents across Wisconsin said their opinion on wolves had not changed.

Biologist John Vucetich, who studies wolves at Michigan Technological University, took issue with the fact that human intolerance was cited in the Fish and Wildlife Service's proposal as one of the limits to the possibility that gray wolves would recolonize more of their historic range.

Cristina Eisenberg, an ecology researcher at Oregon State University, added that "wolves travel up to a thousand miles to find a mate and establish new territory." Eisenberg, who is working on a book about conservation policy for large carnivores, told LiveScience that delisting wolves on a nationwide basis means that states like Colorado and Utah are unlikely to have a wolf population in the future.

Among the critics of the proposal at Monday's hearing was one of Ashe's predecessors, Jamie Rappaport Clark, president and CEO of Defenders of Wildlife, who was director of the U.S. Fish and Wildlife Service under the Clinton administration.

"When wolf recovery began more than 25 years ago, I had really high hopes," Clark said in her testimony.

"Using Yellowstone, central Idaho, the desert Southwest as sources, we had hoped not only to prevent the extinction, but to restore them throughout a significant portion of their range," Clark added. "Fast forward to today, with wolves struggling to gain a toehold in the Northwest and still non-existent in states with significant areas of unoccupied habitat like California, Utah and Colorado, the federal government seems ready to give up before the job is finished."

But Ashe bristled at that perception.

"The idea that the Fish and Wildlife Service has a desire to wring our hands and walk away from wolves could not be further from the truth," he told reporters earlier in the day. "But the time has come for us to focus our efforts where they are needed most."

Ashe said it is legitimate to consider how wolves could be a healthy part of an ecosystem in a state like Colorado, but asked, "Is that necessary in order to ensure that wolves are not in danger of extinction?

"We believe the answer is no," Ashe said. "That's a good question to ask Colorado. The same question could be asked in Utah and California and Nevada and in other states where wolves don't exist today."

Others see the battle over wolves as a result of unanswered philosophical questions about how humans live alongside wildlife in the United States. Deciding where wolves belong today after the animals were nearly exterminated becomes a matter of ethics, not science.

"I don't think we have any clue as a society what counts as an endangered species," Vucetich told LiveScience last week.

The government shutdown throws a wrench into the agency's next steps; additional public hearings were scheduled for this week in Albuquerque, N.M., and Sacramento, Calif., but those events have now been canceled.

The Fish and Wildlife Service proposal will be subject to an independent peer review. That process was put on hold earlier this year when the agency found that some of the reviewers had signed a letter critical of the proposal (after identifying the individuals based on their resumes). Vucetich was among those disqualified reviewers).

The public comment period remains open until Oct. 28, and a final decision on the proposal is expected within a year.