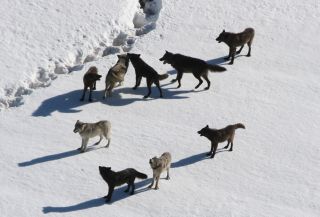 Wolves are social animals and usually live in packs consisting of eight to 12. Here, the "Gibbons" wolf pack, named after its territory in the Gibbon Meadows of Yellowstone National Park, takes a rest in the snowy landscape. Despite the "gray wolf" name, the wolves' coats range in color from black and gray to nearly white.
(Image: © National Park Service)

Wolves are large carnivores — the largest member of the dog, or Canid, family. Wolves are common to all parts of the Northern Hemisphere. They are usually shy and cautious around humans, but unlike the dog, have not been domesticated at all.

There are three species and close to 40 subspecies of wolf, according to the Integrated Taxonomic Information System (ITIS), so they come in many different sizes. The most common type of wolf is the gray wolf, or timber wolf. Adult gray wolves are 4 to 6.56 feet (120 to 200 centimeters) long and weigh about 40 to 175 lbs. (18 to 79 kilograms). As its name indicates, the gray wolf typically has thick gray fur, although pure white or all black variations exist.

Wolves are found in North America, Europe, Asia and North Africa. They tend to live in the remote wilderness, though red wolves prefer to live in swamps, coastal prairies and forests. Many people think wolves live only in colder climates, but wolves can live in temperatures that range from minus 70 to 120 degrees F (minus 50 to 48.8 degrees C), according to the San Diego Zoo.

The Eastern wolf — also known as Great Lakes wolf, Eastern timber wolf, Algonquin wolf or deer wolf — has been deemed a distinct species from their Western cousins, according to a review by U.S. Fish and Wildlife Service scientists. Eastern wolves used to live in the northeastern United States, but now remain only in southeastern Canada.

In 2016, the Center Biological Diversity filed a notice of intent to sue the Fish and Wildlife Service to protect red wolves in the United States. According to research published in the journal Science Advances in 2016, though, there is only one type of wolf in North America. DNA testing found that only gray wolves are found on the continent. The research also found that red wolves and Eastern wolves may be hybrids of grey wolves and coyotes.

Wolves hunt and travel in packs. Packs don't consist of many members, though. Usually, a pack will have only one male and female and their young. This usually means about 10 wolves per pack, though packs as large as 30 have been recorded.

Packs have a leader, known as the alpha male. Each pack guards its territory against intruders and may even kill other wolves that are not part of their pack. Wolves are nocturnal and will hunt for food at night and sleep during the day.

Wolves are voracious eaters. They can eat up to 20 lbs. (9 kg) of food during one meal. Since they are carnivores, their meals consist of meat that they have hunted.

Gray wolves usually eat large prey such as moose, goats, sheep and deer. Normally, the pack of wolves will find the weakest or sickest animal in a herd, circle it and kill it together. Wolves are known to attack and kill domestic animals as well as animals they find in the wild.

Red wolves eat smaller prey such as rodents, insects and rabbits. They aren't afraid of going outside their carnivorous diet and will eat berries on occasion, too.

Young wolves are called pups. The leader of the pack and his female mate are usually the only ones in a pack that will have offspring. They mate in late winter. The female has a gestation period of nine weeks and gives birth to a litter consisting of one to 11 pups.

When the pups are born, they are cared for by all of the adult wolves in the pack. Young pups start off drinking milk from their mother, but around five to 10 weeks they will start eating food regurgitated from adult pack members.

At six months, wolf pups become hunters, and at 2 years old they are considered adults. On average, a wolf will live four to eight years in the wild.

This the classification of wolves, according to ITIS:

Though wolves once roamed far and wide, they are very scarce today. The International Union for Conservation of Nature and Natural Resources (IUCN) lists red wolves as critically endangered. According to the National Parks Conservation Association, there are 20 to 80 red wolves currently living in the wild.

The Ethiopian wolf is also listed as endangered by the IUCN. The Eastern wolf is threatened and is protected in Canada.

Packs of wolves don't like to stay in one place. They are known to travel as far as 12 miles (20 kilometers) per day.

Wolves have friends. Wolves howl to communicate with other members of the pack. Researchers have found that they howl more to pack members that they spend the more time with.

There are many names for gray wolves. Besides timber wolf, they are also called common wolf, tundra wolf, Mexican wolf and plains wolf.

To help with the red wolf population, wild wolves are given pups that are born in captivity. This is called "fostering."

Wolves also communicate by leaving scent marking such as urine or feces on a trail.

Wolves are very similar to dogs in behavior. They love to play, chew on bones but will growl or snarl when threatened.