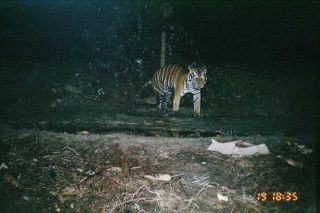 One of four pictures of a Sumatran tiger captured by a camera trap inside Tesso Nilo National Park in central Sumatra shows a male missing the lower half of its right front leg.
(Image: © World Wildlife Fund)

A camera trap inside an Indonesian national park has photographed a three-legged Sumatran tiger that lost the lower half of its right front leg to escape a snare. Sumatran tigers are the most critically endangered tiger subspecies in the world, with fewer than 400 individuals left in the wild. A total of four photographs, taken in March and May of this year inside Tesso Nilo National Park in central Sumatra, show the male tiger that appears to be in good physical condition other than the missing paw, said Sunarto, a tiger biologist in Riau with the World Wildlife Fund, which funded the camera trap and related research. Like many Indonesians, he goes by a single name. The tiger is probably the same individual reported caught in a snare in November 2006 and that somehow scratched or cut off its own paw to escape, leaving part of its leg in the snare, Sunarto said. "It's particularly upsetting that this happened inside a national park, where tigers are supposed to enjoy protection," he said in a prepared statement. "This tiger looks like he's in good condition, but his future is uncertain. The Sumatran tiger is at such low levels, we can't afford to lose even one individual to a snare." Sumatran tigers are only found on that island, where they have been hunted for the black market. Their habitat is being lost to agricultural and logging operations. They also are threatened by snares set by poachers . Since 2005, WWF and Tesso Nilo National Park and other antipoaching officials have confiscated at least 101 snares, 75 of them inside the protected areas of the park and Rimbang Baling Wildlife Reserve. Of the 101 snares, 23 were identified as targeting tigers. The rest were set to control pests or catch bushmeat in the form of wild boar, muntjac and sambar deer and sunbears. The antipoaching effort tries various methods to urge people to stop using snares and to educate them on the risks of such practices. "The use of snares is not only threatening the remaining tiger population, it also leads to a bigger problem: human-tiger conflict," said Sunarto, leader of the antipoaching team. "When a tiger is sick or crippled, its ability to hunt and catch natural prey is reduced significantly. As a result, such tigers search for food in nearby villages, attacking livestock or even people."