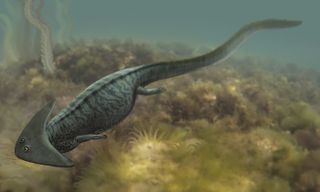 The end of the Permian period, around 252 million years ago, was a dire time for life on Earth.

Scientists believe a series of violent volcanic eruptions occurred in what is today Siberia, pumping greenhouse gases like carbon dioxide and methane into the atmosphere, which warmed the planet.

Then came the "Great Dying." About 96 percent of creatures in the ocean and 70 percent of terrestrial species living on the supercontinent Pangaea went extinct in a matter of several thousand years (not a very long time in geological terms). The so-called Permian-Triassic mass extinction event was the worst in Earth's history. The planet lost a huge diversity of animals, from sharks and reptiles to ammonites and corals, that are known only by their fossils today. [7 Iconic Animals Humans Are Driving to Extinction]

Researchers have long sought to understand how this die-off played out. In a study published in the Dec. 7 issue of the journal Science, a group of scientists offered an account for how this mass extinction event killed so many ocean creatures. The study showed how warming waters couldn't hold enough oxygen to support most life.

"This is the first time that we have made a mechanistic prediction about what caused the extinction that can be directly tested with the fossil record, which then allows us to make predictions about the causes of extinction in the future," the first author of the study, Justin Penn, a doctoral student in oceanography at the University of Washington, said in a statement.

Penn and his colleagues ran a computer simulation of the changing conditions Earth experienced during the transition from the Permian to the Triassic, with ocean surface temperatures in the tropics rising by 20 degrees Fahrenheit (11 degrees Celsius).

In the researchers' model, ocean circulation became quite stagnant and about 76 percent of marine oxygen was depleted around the globe. Oxygen loss varied according to geography, generally hitting deeper waters hardest; about 40 percent of seafloor environments totally lacked oxygen after this transition.

Using data on the oxygen -requirements of 61 modern species, the researchers then ran simulations to see how marine animals would adapt to these harsh new conditions,.

Investigators found that most species would have had to migrate to new habitats in an attempt to survive. But the creatures didn't have an equal chance at making it. The study showed that species that had been living in oxygen-rich, cold-water environments at high latitudes were especially vulnerable to extinction, a pattern the researchers said is borne out in the fossil record.

While the Permian-Triassic extinction was driven by a natural catastrophe, the scientists said the study offers a warning about the dangers of human-made greenhouse gas emissions, which are the primary drivers of climate change today.

"Under a business-as-usual emissions scenarios, by 2100, warming in the upper ocean will have approached 20 percent of warming in the late Permian, and by the year 2300, it will reach between 35 and 50 percent," Penn said. "This study highlights the potential for a mass extinction arising from a similar mechanism under anthropogenic climate change."

At the rate that Earth is losing species currently, some researchers have argued that the next mass extinction event is already underway.