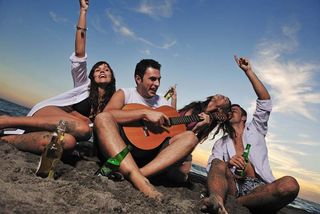 Drinking alcohol seems to be one way for college students to up their social status, possibly explaining why schools have consistent and often high levels of binge drinking, a study reported Aug. 20, 2012, suggests.
(Image: © .shock, Shutterstock)

DENVER — The allure of the beer funnel for college students may have less to do with the need for a buzz and more to do with a desire for social status, new research finds.

College students who binge drink report being happier with their social lives than their non-binging counterparts, according to a new study presented here today (Aug. 20) at the annual meeting of the American Sociological Association. And the higher a student's social status, the more likely they were to binge drink.

The study looked at students at just one liberal arts college in the Northeast, but it could help explain why schools tend to have consistent levels of binge drinking over time, said study researcher Carolyn Hsu, a sociologist at Colgate University in New York.

"I would guess it has to do with feeling like you belong and whether or not you're doing what a 'real' college student does," Hsu told LiveScience. "It seems to be more about certain groups getting to define what that looks like." [Adolescent Angst: 10 Facts About the Teen Brain]

Binge drinking is defined as downing four or more drinks at a sitting for women and five or more for men. For the purposes of this study, students were classified as binge drinkers if they binged once every two weeks or more.

Hsu and her colleagues surveyed 1,595 students at a small Northeastern liberal arts college. (As part of the conditions for doing the study, Hsu could not reveal the college's identity.) In initial research, Hsu said, the researchers noticed a theme of students complaining about high levels of binge drinking.

"One thing that was a recurrent comment were students who said, 'Everyone drinks here. … I don't want to get drunk, but I feel like I don't belong here if I don't.' … Then the next person would write, 'I don't really want to drink, but this is what everyone else does.' And the next person would write, 'You know, I don't mind drinking a little, but I don't want to get smashed, but everyone does that,'" Hsu said.

"I look at this and I think, 'Why don't you guys just have a party without drinking? None of you want to be doing this!'" Hsu added.

The reluctant drinkers raised the question of why students felt so obligated to binge drink, Hsu said, so she and her colleagues decided to take a closer look. A number of comments further linked binge drinking to wealthy students on campus, particularly fraternity and sorority members; the researchers also wanted to find out if those perceptions were accurate.

Getting smashed for social satisfaction

To do so, they compared students' social status to their rates of binge drinking and to their satisfaction with their social lives. At this particular school, whites are the majority, so white students were considered to have more social status, along with wealthier students, men, straight students and fraternity or sorority members.

The first finding was that the students' anecdotal perceptions about who drinks were right. Higher-status students had higher rates of binge drinking, whether status was defined as race, wealth, class, sexual orientation or Greek life participation. These same high-status students also had the highest satisfaction with their college social lives.

"They almost seemed to move themselves up a little bit, or to put it in more efficient language, they now have higher levels of social satisfaction," Hsu said.

Hsu was quick to note that binge drinking is not the smartest way to improve your chances of college happiness. Binge drinking was also associated with higher rates of sexual victimization and academic troubles, among other nasty consequences, she said. [7 Ways Alcohol Affects Your Health]

"We think this is a terrible thing," Hsu said.

Hsu hopes to expand the research to other schools, but said the findings could explain how campus culture fosters binge drinking. Even though student bodies turn over every four years and universities go through many changes in demographics over time, binge-drinking rates remain remarkably stable, she said. It's possible that the association of binge drinking with status explains why the practice is so hard to eradicate.

At the university studied, "this behavior is so associated with being higher status that if you don't do it, you don't have as high levels of social satisfaction," she said.

One glimmer of hope, Hsu said, was that students in religious organizations who did not binge drink were more socially satisfied than other low-status non-bingers.

"If you're in a community that's big enough that creates its own social life, you might actually get to not care what the mainstream campus message is," she said. She added that she hopes the findings encourage students to back away from the booze.

"Maybe this is a fantasy, but I do honestly hope that some college students will actually react to this by saying, 'Okay, I want to rebel against this, I don't even like those people, I don't want them to define the college experience for me.'"