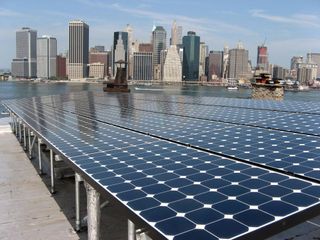 A $10 million prize could make rooftop solar panels a much more common sight on U.S. homes and businesses. The new contest launched by the U.S. Department of Energy aims to shatter the price barrier for solar power installations before the end of 2014.

Success in the SunShot Prize would give a huge boost to the Department of Energy's goal of making solar energy affordable compared with other power sources by 2020. Anyone hoping to compete for the millions in prize money must deploy 5,000 new rooftop solar panel installations at an average price of $2 per watt — the target cost without any subsidies.

"The investments in American startups and the new competition announced today further our efforts to seize on the tremendous global market for clean energy technologies, representing hundreds of billions of dollars worldwide," said Steven Chu, U.S. Secretary of Energy, in a statement released on June 13.

A first place team can expect to claim a $7 million prize and the hefty title of "SunShot Prize Winner of America's Most Affordable Rooftop Solar." Second and third place teams will receive $2 million and $1 million, respectively, as prize finalists.

Each of the 5,000 required installations must have a power range between 1 and 15 kilowatts. (The average U.S. home used the energy equivalent of 1.3 kilowatts per hour in 2010, according to the U.S. Energy Information Administration.) They must also be installed between Aug. 1, 2012, and Dec. 31, 2014.

Limits exist on what entries count for the SunShot Prize competition, because the rooftop solar panels must sit on buildings inhabited by humans. That excludes sheds, doghouses and small scale solar farms, but a garage attached to a home would count.

Chu also announced up to $8 million in separate awards going to nine U.S. startups — companies focused on making solar installation easier and cheaper. That investment builds on the SunShot Incubator program's record of getting $30 in private investment for every $1 of government funding.