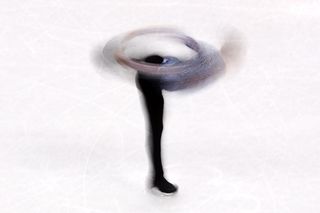 As I write this, I'm sitting in a desk chair — the kind that turns. If I kick my legs hard against the floor, again and again, it will spin fast — not figure-skater fast, but fast enough that when I stop and try to stand, the whole world careens sideways, threatening to hurl me into my editor — which I don't think she would appreciate. [Editor's note: This is correct.] I gave it a try a few minutes ago, and the words of this article are still listing queasily even as I type them out.

This isn't surprising, really. Every child discovers sooner or later that if they spin themselves hard enough, the whole world will tumble. But when it comes to elite athletes — and figure skaters, in particular — we can forget that their lithe, talented bodies are subject to the same physical laws as ours. [Can Olympic Figure Skaters Break the 5-Spin Barrier?]

When Mirai Nagasu hurls herself into a whirling triple axel, Nathan Chen hops balletically into the air and turns four times before landing, or Adam Rippon contorts himself through a series of fluid shapes while spinning his way on one skate through long measures of music, their wet inner ears — human beings' motion sensors and the origins of most dizziness — slosh around just the same as mine in that rotating chair (or yours, if you gyrate fast enough).

The difference between Olympic figure skaters and the rest of us, it turns out, is deeper than the inner ear, buried in the brain.

Where dizziness comes from

In our inner ears, there are three fluid-filled tubes called "semicircular canals," said Paul DiZio, a neuroscientist at Brandeis University who studies balance, motion and dizziness. Each one is aligned with a different axis of motion: up and down, left and right, and side to side.

Nod your head yes, and the sensors in one set of tubes spark to life. Shake your head no, and another set of tubes sends signals to the brain. Touch your ears to each shoulder, and the final set of sensors activates.

"Normally, the motions we make don't last for too long," DiZio said.

And rotational motion, in particular, tends to occur in short stretches of time — turning to look out the window, leaning your head back to crack your neck, that sort of thing. And our inner ears are built well for tracking that sort of motion.

"That information's helpful for just knowing where we are in the world, and it helps us to keep our eyes stable in the world," DiZio said.

Eye stability turns out to matter a lot for balance and motion sickness, said James Lackner, also a neuroscientist and motion-sickness expert at Brandeis University.

If we can keep our eyes fixed on the world against the spinning of our bodies, we usually don't get nauseous. But when our sense of place and movement gets out of whack, our eyes start to flicker spasmodically as they try to keep up with motion that isn't really happening. DiZio compared the effect to watching a movie filmed by a photographer with shaky hands. And that, Lackner added, is when our gorges rise.

Given those reactions, sustained spinning — which our bodies just aren't built for — is a perfect disruptor of our inner ears and inertial senses, DiZio said.

A similar effect happens in my ear when I spin on my office chair. The fluids in my ear pick up enough momentum that they keep sloshing long after I've stopped the chair, sending signals through those little seaweed-like sensors to my brain to say my body is still in motion. My brain tries to correct for that motion, juddering my eyes and urging my body to lean one way or another, and then I start to topple.

Figure skaters exert amazing control over their own senses

Figure skaters like Nagasu, Chen and Rippon aren't immune to these effects; their inner ears don't behave any differently from mine or yours. No one can train those fluids not to obey the laws of inertia.

In the GIF below, Russian skater Evgenia Medvedeva's inner ear is likely whipped into more of a sensory frenzy than most people experience in their entire lives — an effect that's only compounded each time she changes the position of her head, DiZio said.

Put an untrained person through that kind of motion, and they'd come out of it feeling like they were "tumbling through space," with their inner ears signaling ongoing motion along more than one axis, Lackner told Live Science.

And that's not a reflex a skater balancing on one blade can afford.

The first step to overcoming it, DiZio said, is to habituate the brain to the sensation of dizzy motion.

Habituation is a trick the brain does all the time, to avoid being constantly overcome by sensations. "It's like if you start eating something sweet, and you eat it for a while, it doesn't taste as sweet," DiZio said.

But to prepare for Olympic-level high-speed spinning, figure skaters need to adjust to an entire set of sensory inputs. That's a bit tougher than adjusting to an oversweetened slice of cheesecake, or gradually lowering yourself into a pool of frigid water.

DiZio and Lackner understand the process because they've done similar experiments on people who need to control dizziness in other contexts, like potential astronauts and patients with damaged inner ears that send constant, vertigo-inducing dizzy signals to the brain. Brandeis University even has a large room that can spin fast enough to induce seven times the force of Earth's gravity, Lackner said, though they rarely subject their subjects to more than two times the planet's force.

Here's what it comes down to: "Practice — practice over and over and over," DiZio said. [Why Is It So Easy to Cheat at The Olympics?]

In vertigo patients, Lackner said, that practice involves all sorts of head-twisting exercises. For figure skaters, the process is more straightforward.

"Do the spins. They start out with just one or two spins and build up, and they work out, too," DiZio said.

At about 44 seconds into the video below, Nagasu straps herself into a device, which one of her coaches then uses to lift and rapidly spin her. That's a harsh assault on the inner ear — one that takes lots of repetition to tune out. And even then, the training isn't perfect.

Ever wonder what training looks like for an Olympic figure skater?@mirai_nagasu shows us what it takes to be among the world’s elite. pic.twitter.com/AtNQy3F9Ly

"You can't 100-percent habituate," DiZio said. Even the most trained skater will still feel some of the disorientation of a long, twisting doughnut spin.

That's where some more subtle tricks can help.

Slate reported in 2014 that skaters' coaches tell them to come out of a spin with their eyes locked on a landmark.

DiZio said that makes sense from a neuroscientific perspective. After a long spin, he said, "the inner ear is kind of reflexively driving the eyes in a way that's going to mess up vision, and if you're already dizzy and your vision gets blurry, you're kind of lost."

By picking landmarks to focus on after each spin in advance, DiZio said, skaters can fix their sight lines after spinning to locate themselves in space. That way, "even if the inner ear is giving them messed-up information, at least the eyes are helping them out," he said.

But DiZio, after watching lots of figure skaters at the Olympics, thinks he's landed on another reason skaters don't tip over, retching after each performance.

"This is my theory — to tell you the truth, I haven't seen this anywhere — but I think at least 80 percent of the time when the person does the spin and they stop, they don't just stop solid and make no movement. They do like a little dance motion at the end in which they dip their head," he said.

That could, consciously or unconsciously, be an effort to take advantage of sensory "dumping," effectively hacking the way the brain handles information.

Here's how it might work, as DiZio explained it:

All the information from the inner ear enters the brain through what amounts to a relay center and amplifier. Nerves twist around on themselves, causing the signal "Spinning! Spinning!" to reverberate louder and louder in the brain so it can reach all the relevant systems. And that "Spinning!" signal is routed along the exact same pathways used to tell the rest of the brain how the body is oriented relative to the constant force of gravity.

Dip the head, jolting the apparent direction of gravity, and that signal will travel to the same relay center already firing off "Spinning!" signals. Given limited resources, the relay "dumps" the spinning signal from its amplifiers to make room for a new signal: "Jolted! Jolted!"

"Again, I've never seen that [written] anywhere," DiZio said. "But it looks to me like skaters work into their routine a little movement at the end that doesn't look like it's an accident. Conscious or unconscious, they make it part of their routine."

Lackner confirmed that sensory dumping is a real effect but said he's skeptical that skaters are deploying it in their choreography.

"My guess is that isn't a big deal in skaters because they have gone through such a process of habituation to start with," he said.

Regardless of whether medal-winning skaters actually unconsciously play with their sensory relays in the way DiZio speculates, the mental workout they go through to prepare for their routines seem at least as Olympian as their physical preparations.