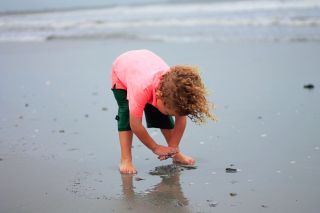 This boy won’t remember all the shells he digs up, but he’ll learn that the beach is the place to find them.
(Image: © Gretchen Gunda Enger/Shutterstock)

Think about your commute: You probably have a firm grasp of what roads, trains or buses you need to take to get to work or school, but can you picture all the other cars or subway-goers that you see along the way?

The reason you may be struggling is because, your brain decides that information is unimportant, according to a new study. When it comes to learning the commute, what your brain cares most about are the big picture things that stay the same, not the tiny differences that emerge on a day-to-day basis.

In other words, the brain automatically decides on a tradeoff between learning and retaining the specific details of an experience and assimilating all of those similar experiences together, said study lead author Lila Davachi, a neuroscientist and associate professor of psychology at New York University. [10 Things You Didn't Know About the Brain]

"We think of that as knowledge. Over your lifetime, over many experiences, you bring things together to learn how the world works," Davachi told Live Science.

In the study, published online Wednesday (Sept. 27) in the journal Neuron, Davachi and her colleagues demonstrated this tradeoff — long theorized but never shown by neuroscientists — for the first time.

"The fact that it emerged over time means there's something the brain does after sleep. It's likely something not under your control," Davachi said. "It's updating current knowledge, it's adding new information if there's anything useful to add."

In her study, Davachi found that when presented with images of specific objects in one of four scenes — a beach, a jungle, a city or a bedroom — brain scans of participants initially showed each object-place pairing as a distinctive memory of that one event. The scans of what regions of their brains activated and when were distinct for each of the memories. But one week later, the patterns were different, according to the study. Now, when the scientists looked at all of the objects, the pattern of neural activation looked different based on which setting that object had previously been placed in.

"At one week, we started to see a similar structuring," Davachi said. "All the beach scenes were coming together in one pattern."

The experiment revealed that two parts of the brain, in particular, are responsible for assimilating specific memories into broader knowledge. The medial prefrontal cortex, a brain region involved in high-level cognition and recalling distant memories, was particularly active when people were being tested a week later. Davachi said that was to be expected. But what she wasn't expecting to see was that the hippocampus also played a big role.

The hippocampus, Davachi explained, is generally thought to be responsible for keeping distinctive memories separate from one another in the brain, to prevent the very overlap that this experiment found. But in this case, Davachi suggested that the hippocampus was actively re-encoding memories as they were retrieved, perhaps further consolidating them into the brain’s larger body of knowledge, she added.

"You could even interpret this data in the opposite way and say, 'Look, the brain is keeping this information separate,' but the important thing is, it's doing both. It's clustering the information," Davachi said.

But what this study doesn't answer is how memories of a beach scene, for example, are assimilated into the participant’s existing knowledge and experience of being at the beach. However, the new findings show that each category of events, divided by theme, is encoded by the same pattern of neurons as individual, minute details that tend to fade away for the sake of a more general understanding. And within the realm of neuroscience, it's known that the medial prefrontal cortex is also involved in retrieving autobiographical memories of a person's own life.

Davachi’s lab actually conducted this experiment almost two years ago, she explained, so she said even some of the fine details are fuzzy in her memory as she recalls the big picture. To build on these findings, Davachi has been analyzing her data and working to verify her own findings with experiments that simulate more lifelike memories, she said.