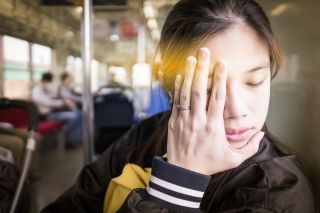 Motion sickness is common in children, but adults are susceptible as well.
(Image: © Anutr Yossundara/Shutterstock.com)

The rocking momentum of a train, car or boat is soothing to some people, but for others, it generates feelings of extreme discomfort — dizziness, nausea and even vomiting.

This condition, known as motion sickness, can strike travelers of all ages, though it appears most frequently in children. The motion that is unique to travel is the most common culprit, but speedy loops and lurches in amusement park rides and the disorienting perspective of moving cameras in 3D movies or virtual-reality environments can also trigger queasiness.

While motion sickness isn't life-threatening, its symptoms can be extremely unpleasant, transforming an otherwise pleasant journey into a stomach-turning nightmare. Why does this particular type of movement make some people feel ill? [Top 10 Mysteries of the Mind]

The answer can be traced back to the conflicting sensory input received by the brain when it perceives the body to be stationary and moving at the same time, according to Dr. Hilary Hawkins, a family medicine practitioner with Orlando Health Physician Associates.

"You don't get sick when you're walking; you get sick when the body's in a still position but something else is generating motion," Hawkins told Live Science. "The balance centers in your inner ear perceive something different than reality."

Inner-ear structures that are collectively known as the vestibular system detect gravity and movement, and relay signals to your brain that help you keep your balance. These signals are supplemented by input from your other senses, but that can be problematic if their data are contradictory.

For example, when you're in a moving car, your eyes see the scenery passing by through the window, which informs your brain that your body is in motion. But your body tells a different story — within the vehicle, you aren't moving forward under your own power. Motion sickness kicks in when your brain doesn't know which line of information to believe.

"The signals are mixed up," Hawkins said, and nausea, sweatiness, headaches and chills emerge as stress responses to the body's balance being out of whack. Drivers, however, are less likely to become carsick than passengers, because when you're the one controlling the vehicle, "the mixed signals are minimized, and your brain is not as confused," Hawkins explained. [7 Weird Facts About Balance]

Nausea is typically the first symptom of motion sickness that people recognize, but in nearly every case, it follows more subtle symptoms, such as drowsiness, irritability and a sensation of fullness in the stomach, according to a July 2014 study published in the journal American Family Physician. Recognizing early symptoms and taking action can head off a bout of motion sickness before it takes hold, the study authors reported.

But if motion sickness already has you turning green, unless you can stop the motion that's behind it, there's not much you can do except ride it out. Other motion sickness studies found that sitting in a forward-facing seat and fixing your gaze on the horizon can help alleviate symptoms, the study authors wrote. Selecting a location in the moving vehicle that minimizes motion as much as possible can also make a difference in how ill you feel.

"Keep the mixed signals to a minimum," Hawkins suggested. "If you're in a car, sit up front. In a boat, stay in the middle, where it's less rocky. In a bus, try to get a window seat. Fresh, cool air helps too, or close your eyes so you turn off the vision of the scenery going by," she said.