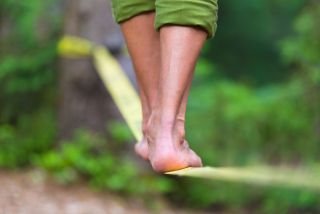 Most people can stand up and walk across a room without giving it much thought. But to do this, your brain must get information from several complex systems in the body, which work together to keep you balanced. Exactly how the body keeps balance, and what happens when these systems don't work properly, might surprise you. Here are some weird facts about your balance.

Your inner ear plays an important role in balance.

Your ears aren't just important for hearing; they aid in balance as well. Several structures in the inner ear, together called the vestibular system, send signals to the brain that help you orient yourself and maintain balance. Two structures, called the utricle and the saccule, monitor linear movements of your head (from side to side and up and down), and also detect gravity, according to the Mayo Clinic. Other structures, which form loops and contain fluid, monitor the rotation of your head. [Balance Exercises: Everything You Need to Know]

Many balance problems stem from conditions that affect the inner ear. For example, if calcium crystals inside the inner ear end up in the wrong place, it can cause the vestibular system to send signals to the brain that your head is moving, when it's actually still, causing you to feel dizzy.

Your muscles, joints and even skin help with balance, too.

Sensory receptors in your muscles, joints, ligaments and skin help tell your brain where your body is in space — a sense called proprioception, according to the Vestibular Disorders Association (VEDA). These receptors, such as those on the bottom of your feet or along your back, are sensitive to pressure or stretching sensations. Receptors in the neck can tell the brain which way the head is turned, and receptors in the ankles can tell the brain how the body is moving relative to the ground, VEDA says.

When a police officer asks a driver to touch his or her nose as part of a sobriety test, the officer is testing the driver's proprioception. People who are impaired by alcohol may fail the test because their brains have difficulty determining the position of their limbs relative to their noses.

Balance gets worse with age.

As we age, we experience impairments in the three main systems that keep us in balance: vision, the vestibular system and proprioception. These impairments, combined with reduced muscle strength and flexibility, make older adults more prone to falls. One-third of American adults over age 65 experience a fall each year, according to the Centers for Disease Control and Prevention.

To avoid being drafted into the Vietnam War, some young men deliberately amputated their big toe because this injury would make them unfit for duty in the government's eyes. But the big toe by itself actually isn't crucial for balance.

People missing a big toe can still walk and run, although they will likely be slower and have a shorter stride, according to Scientific American. A 1988 study of people who had their big toe amputated found that the patients showed changes in their gait and the forces their body generated when walking. But the patients had "little or no disability" from the loss of their big toe, the study concluded.

You can feel like you're moving when you aren't.

If you've ever sat on a train, looked out the window and suddenly felt like your train was moving when it wasn't, you've experienced a phenomenon called "vection." This happens because something that takes up a large part of your visual field has started to move. In the train example, what you actually saw was another train start to move, making you feel as though your train were moving in the opposite direction.

Vection can cause disorientation, because your brain experiences a conflict between the incoming sensory information from different sources, according to VEDA. Your vision tells you that you're moving, but sensory receptors in your body tell you that you aren't moving (you don't feel any vibrations from your train). However, extra information from your vestibular system may override this conflict, VEDA says. You might also find yourself looking out the other window, to figure out whether you are really moving.

Migraines can be linked with balance problems.

About 40 percent of people who have migraines also experience dizziness or balance problems, which can accompany a migraine or occur at a totally separate time, according to VEDA. The condition is known as migraine-associated vertigo. The cause of the condition is not known, but it's possible that migraines affect brain signaling and that this, in turn, slows down the brain's ability to interpret sensory information from the eyes, inner ear and muscles, resulting in a feeling of dizziness, Dr. Sujana Chandrasekhar, president of the American Academy of Otolaryngology-Head and Neck Surgery, told Live Science in a 2014 interview. Another theory is that the dizziness is caused by the release of certain chemicals in the brain that affect the vestibular system.

Some people feel a rocking sensation for months after going on a boat.

It's common for people who've been on a boat to feel like they are still swaying and bobbing even after they set foot on land again. This sensation usually disappears within a few hours or days. But for some people, this sensation of feeling like you're still at sea lasts for months or years. Patients with these symptoms are said to have "mal de debarquement syndrome." [Here's a Giant List of the Strangest Medical Cases We've Covered]

It's not clear why some people develop mal de debarquement syndrome. But one hypothesis is that people with this condition have changes in their brain metabolism and brain activity that make it able to adapt to the unfamiliar movement of the ocean when they're at sea but unable to readapt once this movement has stopped, according to VEDA.