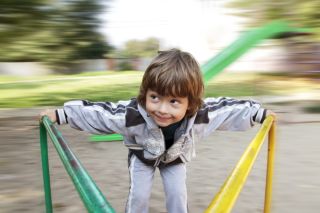 Centrifugal force is ubiquitous in our daily lives, but is it what we think it is?

We experience it when we round a corner in a car or when an airplane banks into a turn. We see it in the spin cycle of a washing machine or when children ride on a merry-go-round. One day it may even provide artificial gravity for space ships and space stations.

But centrifugal force is often confused with its counterpart, centripetal force, because they are so closely related — essentially two sides of the same coin.

"The difference between centripetal and centrifugal force has to do with different 'frames of reference,' that is, different viewpoints from which you measure something," said Andrew A. Ganse, a research physicist at the University of Washington. "Centripetal force and centrifugal force are really the exact same force, just in opposite directions because they're experienced from different frames of reference."

If you are observing a rotating system from the outside, you see an inward centripetal force acting to constrain the rotating body to a circular path. However, if you are part of the rotating system, you experience an apparent centrifugal force pushing you away from the center of the circle, even though what you are actually feeling is the inward centripetal force that is keeping you from literally going off on a tangent.

This apparent outward force is described by Newton's Laws of Motion. Newton's First Law states that "a body at rest will remain at rest, and a body in motion will remain in motion unless it is acted upon by an external force."

If a massive body is moving through space in a straight line, its inertia will cause it to continue in a straight line unless an outside force causes it to speed up, slow down or change direction. In order for it to follow a circular path without changing speed, a continuous centripetal force must be applied at a right angle to its path. The radius (r) of this circle is equal to the mass (m) times the square of the velocity (v) divided by the centripetal force (F), or r = mv^2/F. The force can be calculated by simply rearranging the equation, F= mv^2/r.

In the case of a rotating system, the centripetal force pulls the mass inward to follow a curved path, while the mass appears to push outward due to its inertia. In each of these cases, though, there is only one real force being applied, while the other is only an apparent force.

Examples of centripetal force in action

There are many applications that exploit centripetal force. One is to simulate the acceleration of a space launch for astronaut training. When a rocket is first launched, it is so laden with fuel and oxidizer that it can barely move. However, as it ascends, it burns fuel at a tremendous rate, continuously losing mass. Newton's Second Law states that force equals mass times acceleration, or F = ma.

In most situations, mass remains constant. With a rocket, though, its mass changes drastically, while the force, in this case the thrust of the rocket motors, remains nearly constant. This causes the acceleration toward the end of the boost phase to increase to several times that of normal gravity. NASA uses large centrifuges to prepare astronauts for this extreme acceleration. In this application, the centripetal force is provided by the seat back pushing inward on the astronaut.

Another example of the application of centripetal force is the laboratory centrifuge, which is used to accelerate the precipitation of particles suspended in liquid. One common use of this technology is for preparing blood samples for analysis. According to Rice University's Experimental Biosciences website, "The unique structure of blood makes it very easy to separate red blood cells from plasma and the other formed elements by differential centrifugation."

Under the normal force of gravity, thermal motion causes continuous mixing which prevents blood cells from settling out of a whole blood sample. However, a typical centrifuge can achieve accelerations that are 600 to 2,000 times that of normal gravity. This forces the heavy red blood cells to settle at the bottom and stratifies the various components of the solution into layers according to their density.

This article was updated on May 10, 2019 by Live Science Contributor, Jennifer Leman.