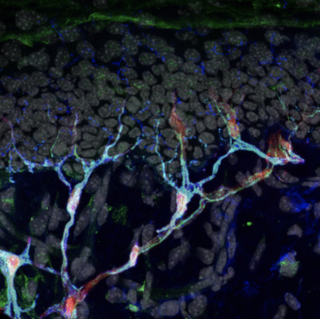 Researchers discovered a new organ sitting below the outer layer of the skin. The organ is made up of nerves (blue) and sensory glia cells (red and green).
(Image: © Hind Abdo)

Scientists have found a previously unknown organ lurking under the skin, and it may help you feel the pain of a pinprick.

It was previously thought that people perceive the pain of a pinprick via nerve endings that sit right below the outer layer of the skin. Now, a new study suggests that it's not just nerves, but nerves tangled up in special cells that make us flinch.

"We have known for a long time that there are various kinds of sensory organs in the skin, but those that we've been aware of have only been involved in touch sensation," said study senior author Patrik Ernfors, a professor of tissue biology at the Karolinska Institute in Sweden.

This mesh of branched cells and nerves is a newfound "sensory organ" because it responds to external cues and relays that information to the brain. Unlike other known sensory organs under the skin, this one plays a role in pain perception, Ernfors told Live Science.

Related: Top 3 Techniques for Creating Organs in the Lab

This sensory organ is sensitive to pricks or jabs, and once activated by pressure, the organ sends signals to the brain. The brain then sends signals down to the site of the prick that tells us to feel pain.

The cells that make up this organ, called Schwann cells, each look "a little bit like an octopus," with long, tentacle-like protrusions extending into surrounding nerves, Ernfors said. Schwann cells are generally known to surround and insulate nerves.

But to figure out the function of these specific Schwann cells in the skin, researchers tested what happened when they were turned off in mice; to do so, the scientists used a method called "optogenetics." They inserted a light-absorbing protein into the genomes, and this protein turned the Schwann cells "on" when enough light was absorbed.

When the cells were activated, the mice withdrew their paws, which indicated that they felt pain. The mice also displayed coping behaviors, such as licking and shaking their paws. Just like "if you burn yourself, you flush your hand under cold water,"  the mice were trying to soothe the pain, Ernfors said.

"When we turn these cells off, the animals feel much less pressure and pain" in response to painful pricking sensations than do typical mice, Ernfors said. However, when researchers turned off these cells and then tested the animals for cold and heat sensitivity, the mice could sense those sensations equally well as when the cells were not turned off.

Under the microscope, these Schwann cells rapidly activate and send signals to other nerves when they are poked. Now, Ernfors wants to find if these cells have anything to do with chronic pain, he said.

"Chronic pain has become a focus of attention as opioid addiction continues to debilitate lives and cause mortality," wrote graduate student Ryan Doan and senior scientist Kelly Monk, from the Vollum Institute in Oregon, in a commentary accompanying the study.

The findings were published on Aug. 16 in the journal Science.