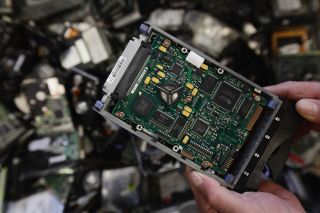 Japanese authorities plan to source the gold, silver and bronze needed by tapping the country’s "urban mine" — millions of discarded smartphones and other small consumer electronics.
(Image: © Sean Gallup/Getty Images)

Recycled electronics will go for the gold, as organizers of the Tokyo 2020 Olympics have announced their plan to source the gold, silver and bronze needed for the games' medals from discarded smartphones.

Tokyo 2020 organizers announced this month that all of the Olympic medals will be made from recycled materials. The agenda for Tokyo 2020, which is described as a "strategic roadmap" for the event, specifically calls for the inclusion of sustainability in every aspect of the games. Organizers said they are also working to engage the Japanese population in the event. As such, the committee has invited the public to participate, asking citizens to donate their discarded or obsolete electronic devices.

The project's goal is to collect about 8 tons [7.25 metric tons] of metal, which will be recycled down to about 2 tons [1.8 metric tons] — enough to produce 5,000 medals for the Tokyo 2020 Olympic and Paralympic Games, according to the committee. [Top 10 Craziest Environmental Ideas]

"The life stories of so many are defined by the pursuit of these metal medallions, and those same stories are what inspire and bring millions of us together," Ashton Eaton, a U.S. decathlete and two-time Olympic gold medalist, said in a statement. "And now, thanks to the Tokyo 2020 Olympic Medal Project, not only do the athletes inspire with their stories, but each medal itself has a story of its own."

Eaton said each citizen that donates is contributing to that story as well, which also helps raise awareness about sustainability and environmental issues.

Beginning in April, people in Japan will be able to find collection boxes in more than 2,400 NTT DOCOMO stores (the mobile phone company has partnered with Tokyo 2020), as well as in public offices across Japan. The collection of the recycled consumer electronics will end when the committee meets its 8-ton target.