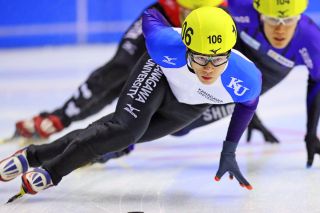 Today (Feb. 13), Japanese short-track speed skater Kei Saito became the first Olympic athlete to be suspended from the 2018 Winter Games due to doping allegations. According to the Court of Arbitration for Sport (CAS), Saito tested positive for a diuretic called acetazolamide, which can be taken to hide the presence of performance-enhancing drugs and is one of more than 200 chemicals prohibited by the World Anti-Doping Agency.

Saito's suspension is the first to occur during the 2018 games, but it's hardly the first scent of doping-related scandal this winter. Just days before Saito's expulsion, the CAS ruled to uphold the bans on 47 Russian athletes and coaches implicated in a state-sponsored doping program during the 2014 Winter Olympics in Sochi, Russia.

The actual rate of doping among Olympic athletes, however, is thought to be far greater than even scandals like these indicate. [10 Biggest Doping Scandals in Olympic History]

"As evidenced by athletes who were previously thought to be clean and weren't, people are willing and able to dope at large scale," said Thomas Hildebrandt, a performance-enhancement researcher and associate professor of psychiatry at the Icahn School of Medicine at Mount Sinai in New York City. "I think we have to assume that the Russians got caught but other programs are doing similar things. And I think it would be foolish of anyone to think otherwise."

How widespread is Olympic doping?

The World Anti-Doping Agency (WADA) tests blood and urine samples from several hundred thousand Olympic athletes every year. About 1 to 2 percent of these samples test positive for prohibited substances, but actual instances of doping are estimated to be significantly more widespread. In one anonymous survey of several thousand world-class amateur athletes, up to 57 percent admitted to using performance-enhancing drugs in the past year, according to a study published in the journal Sports Medicine.

WADA said that results like these suggest that many tens of thousands of athletes may be getting away with behavior that, for better or worse, is considered cheating. But why is it so easy to cheat this system?

"The big problem of testing is the timing," Hildebrandt said. "You have to time the test correctly to detect the substance."

Olympic athletes can be tested at any time — potentially even years in advance of the next competition, Hildebrandt said. But because drug tests are so expensive to conduct, most of these evaluations are administered much closer to when the actual competitions occur, he said.

Athletes and coaches are aware of this, "and a lot of athletes get done with their doping before they're at high risk for testing," Hildebrandt said. Drugs taken in small doses during the off-season can be almost impossible to detect in urine samples a year or more later, but the performance-enhancing effects remain, he said.

"You can build muscle and keep it," Hildebrandt said. "Athletes can make physical gains in times when they're not under much suspicion or would be unlikely to be tested at high frequency. So, they can walk into the games and honestly think, 'I'm clean,' have no drugs actually in their system, but have gotten to the place where they're at physically with other help along the way."

A step behind the steroids

Beyond clever timing, athletes also have the ongoing evolution of doping drugs on their side: WADA officials cannot test for a performance-enhancing drug they've never seen before. Because of this, "the ability to beat doping tests continues to evolve, and the test will always be one step behind the perpetrators," Hildebrandt said.

As an example, Hildebrandt pointed to anabolic steroids — the most common form of performance-enhancing substance among athletes, according to a 2017 WADA report. Steroids primarily target the body's androgen receptors, which bind with hormones such as testosterone to facilitate muscle growth, among other things.

However, "there are atleast 500 known chemicals that can target the androgen receptor [and] that can be made in a basic chemistry lab," Hildebrandt said."Someone who's smart, motivated and knows a lot about chemistry can find all kinds of creative ways to target that receptor with a substance that doesn't show up on the traditional test — because [officials] have to know a drug exists before they go looking for it."

Over time, drug tests do catch up with the drugs themselves, resulting in expensive scandal investigations and relatively small groups of athletes losing their medals years after competing. (This can happen because labs will often save a small sample of an athlete's blood for later testing, Live Science reported in 2016.) In the meantime, Hildebrandt said, many other athletes may get away with using performance-enhancing drugs by taking low doses at times when they are unlikely to be tested.

"As that pattern persists," Hildebrandt said, "you will continue to have people who are willing to take the risks to game the system."