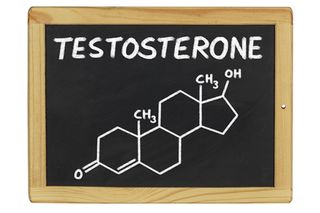 Testosterone is a male sex hormone that is important for sexual and reproductive development. The National Institutes of Health regards testosterone as the most important male hormone. Women also produce testosterone, but at lower levels than men.

Testosterone is involved in the development of male sex organs before birth, and the development of secondary sex characteristics at puberty, such as voice deepening, increased penis and testes size, and growth of facial and body hair.

The hormone also plays a role in sex drive, sperm production, fat distribution, red cell production, and maintenance of muscle strength and mass, according to the Mayo Clinic. For these reasons, testosterone is associated with overall health and well-being in men. One 2008 study published in the journal Frontiers of Hormone Research even linked testosterone to the prevention of osteoporosis in men.

In women, the ovaries and adrenal glands produce testosterone. Women's total testosterone levels are about a tenth to a twentieth of men's levels.

Levels of testosterone naturally decrease with age, but exactly what level constitutes "low T," or hypogonadism, is controversial, Harvard Medical School said. Testosterone levels vary wildly, and can even differ depending on the time of day they're measured (levels tend to be lower in the evenings). The National Institutes of Health includes the following as possible symptoms of low testosterone:

It is important to note, however, that conditions other than low T can cause erectile dysfunction, such as diseases in the nerves or blood.

Doctors typically to treat men for hypogonadism if they have symptoms of low testosterone and their testosterone levels are below 300 nanograms per deciliter.

High testosterone levels can cause problems in women, including irregular menstrual cycles, increases in body hair and acne, and a deepening of the voice. Women with polycystic ovarian syndrome have high levels of male hormones, including testosterone, which can be a cause of infertility.

For people who are worried about low or high testosterone, a doctor may perform a blood test to measure the amount of the hormone in the patient's blood. When doctors find low-T, they may prescribe testosterone therapy, in which the patient takes an artificial version of the hormone. This is available in the following forms: a gel to be applied to the upper arms, shoulders or abdomen daily; a skin patch put on the body or scrotum twice a day; a solution applied to the armpit; injections every two or three weeks; a patch put on the gums twice a day; or implants that last four to six months.

Men using testosterone gels must take precautions, such as washing hands and covering areas where the gel is applied, according to the U.S. Food and Drug Administration. Women and children should not touch the gel or the skin where the gel or patch is applied.

In older men with true testosterone deficiencies, testosterone treatment has been shown to increase strength and sex drive, experts say. But sometimes, symptoms of erectile dysfunction are due to other conditions, including diabetes and depression, according to the Mayo Clinic. Treating these men with testosterone hormone won't improve symptoms.

The safety of testosterone treatment is still being researched. It has several possible side effects and some possible long-term effects, as well.

Other side effects include increased risk of heart problems in older men with poor mobility, according to a 2009 study at Boston Medical Center. A 2017 study published in JAMA found that treatments increase coronary artery plaque volume. Additionally, the Food and Drug Administration (FDA) requires manufactures to include a notice on the labeling that states taking testosterone treatments can lead to possible increased risk of heart attacks and strokes. The FDA recommends that patients using testosterone should seek medical attention right away if they have these symptoms:

The treatment can also increase the risk of sleep apnea, promote prostate and breast growth, and even encourage the development of prostate cancer, according to the Mayo Clinic.