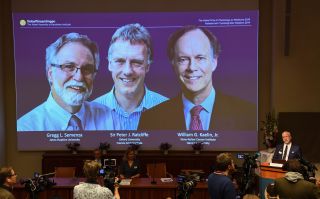 Nobel Assembly member, Randall Johnson, speaks during the announcement of this year’s winners of the Nobel Prize in Physiology or Medicine, at the Karolinska Institute in Sweden: (from left to right on the screen) Gregg Semenza, Peter Ratcliffe and William Kaelin.
(Image: © JONATHAN NACKSTRAND/AFP via Getty Images)

This year's Nobel Prize in physiology or medicine has been awarded jointly to three scientists who figured out how cells sense and adapt to changes in levels of oxygen, the Nobel Assembly at Sweden's Karlinska Institute announced this morning (Oct. 7).

The three Nobel Laureates, William G. Kaelin Jr, Sir Peter J. Ratcliffe and Gregg L. Semenza, identified the molecular machinery that turns the activity of genes up or down in response to varying levels of oxygen.

"The seminal discoveries by this year's Nobel Laureates revealed the mechanism for one of life's most essential adaptive processes," according to the Nobel Prize organization.

Related: The 10 Noblest Nobel Prize Winners of All Time

The ability of cells to detect oxygen levels and respond is essential to keeping the body functioning and can play a big role in some diseases. At the most basic level, cells need oxygen to convert food into energy.

"Cells and tissues are constantly experiencing changes in oxygen availability. As an embryo grows and develops, as muscles work, the oxygen available changes as the tissues themselves change," a member of the Nobel committee, Randall Johnson, said this morning during the announcement in Sweden. "Cells need a way to adjust to the amount of oxygen they have while still doing their important jobs."

For instance, during intense exercise, muscle cells must adapt to higher oxygen demands. Oxygen-sensing machinery is essential for fetal development, as it controls normal blood vessel formation and the development of the placenta, the Nobel Prize organization wrote. The machinery also plays a role in anemia and even cancer — stimulating the formation of blood vessels so cancer cells can spread.

The three scientists will share equally the Nobel prize of 9 million Swedish kronor (about $909,000).