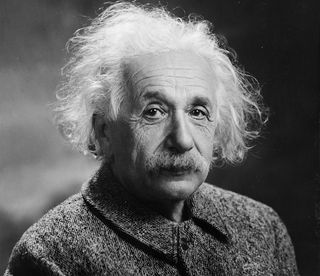 The 2011 Nobel Prizes are being handed out this week. So far, the prize for physiology or medicine has gone to a trio of researchers who uncovered various aspects of the nature of immunity, and the physics prize has gone to a trio of physicists who discovered in the late 1990s that the expansion of the universe is accelerating.

These achievements are great indeed, and the winners join a list of some of humanity's finest representatives. Here's a sampling of notable Nobel Prize recipients of the past, and what they accomplished. [Gallery of notable winners]

Who better to kick off this list than perhaps the most famous scientist in the history of the world? Albert Einstein won the Nobel Prize in Physics in 1921 for discovering the cause of the "photoelectric effect." This was a perplexing phenomenon in which atoms, when bombarded with light, emitted electrons. In 1905, Einstein argued that light was divided into discrete packets (which we now call photons). He theorized that, when these light packets struck atoms, electrons in those atoms absorbed them, and, with the extra energy, wrested free of the atoms that bound them.

The fact that light is composed of particles that are absorbed and emitted by atoms was just one of Einstein's many revolutionary discoveries. He also came up with the theories of special and general relativity, and discovered that matter and energy are equivalent (as embodied in the equation E=mc²). A true polymath — within science, at least — he even wrote a paper explaining why the average "meandering ratio" of a river — the ratio of its length to the distance between its source and mouth as the crow flies — is equal to pi.

Marie Curie was the first person to win two Nobel Prizes, and is one of only two people in the history of the Nobels to win in two different fields. She and her husband Pierre, along with Henri Becquerel, won the Physics Prize in 1903 for their discovery of radioactivity. She then won for chemistry in 1911 for discovering the elements radium and polonium and investigating their properties. [What Everyday Things Around Us Are Radioactive?]

The Curies are the darlings of the Nobel Prizes. On top of Marie and Pierre's wins, their daughter Irene Joliot-Curie received the chemistry prize in 1935 together with her husband, Frédéric. And Henry Labouisse, the husband of Marie Curie's second daughter, was the director of UNICEF when the international organization won the Nobel Peace Prize in 1965.

The 1945 Nobel Prize in Physiology or Medicine went to Sir Alexander Fleming, Ernst Chain and Sir Howard Florey for their discovery of penicillin, a fungus, and its use as an antibiotic.

Common wisdom has it that Sir Alexander made the discovery accidentally when he ate a piece of moldy bread and became cured of an infectious disease. The grain of truth in the story is that the discovery was indeed an accident. Fleming went away on vacation in August 1928 and returned to his laboratory in early September to discover that a fungus had developed in a stack of Petri dishes containing bacteria. The bacteria had died in the dishes immediately surrounding the fungus, while bacteria in the dishes farther away were unaffected.

Fleming spent the next couple of decades investigating the antibacterial effects of what he at first called "mould juice" and later named "penicillin" after the fungus' genus (Penicillium). Chain and Florey contributed by conducting rigorous clinical trials that proved the great usefulness of penicillin and figuring out how to purify and produce it in bulk.

In 1946, an American named Hermann Muller was awarded the Nobel Prize in Physiology or Medicine for discovering that radiation causes mutations. A biologist by training, he spent the 1920s investigating the effects of X-rays on various organisms and in 1926 found a clear link between radiation exposure and lethal mutations. In the following years, Muller worked tirelessly to publicize the grave dangers of radiation exposure. When his work was recognized by the Nobel Committee, it drew public attention to the health effects of nuclear fallout, especially in the wake of the 1945 atomic bombings of Hiroshima and Nagasaki.

For the remainder of his life, Muller was a leading voice in the campaign against nuclear weapons testing and worked to diffuse the threat of nuclear war. [How Many Genetic Mutations Do I Have?]

Francis Crick and James Watson won the Nobel Prize in Physiology or Medicine in 1962 for their discovery that DNA is shaped like a double helix. Maurice Wilkins shared the prize with them for producing some of the earliest evidence in support of their claim — he used a technique called X-ray crystallography to map out the shape of the DNA molecule.

Their prize remains controversial because of who was left off the list of honorees. Watson and Crick formed their hypothesis on the shape of DNA in 1953 only after analyzing an X-ray diffraction image of DNA taken by a biophysicist named Rosalind Franklin a year earlier. (The image was shown to Watson and Crick without her knowledge.) Franklin had already written a draft of her paper on the helical form of DNA before Watson and Crick wrote theirs, but her contributions were overlooked for years. Franklin was never able to make her case to the Nobel Committee. Watson, Crick and Wilkins received the honor four years after she died. [New World Record: Largest Human DNA Helix]

The International Committee of the Red Cross has won the most Nobel Prizes of any one entity or person. It won Peace Prizes in 1917 and 1944 for its work during the First and Second World Wars, and a third Peace Prize in 1963, along with the League of Red Cross Societies, marking the 100th anniversary of its founding.

During the world wars, the Red Cross visited and monitored the POW camps of all warring parties, organized relief assistance for civilian populations, and administered the exchange of messages regarding hundreds of thousands of prisoners and missing persons.

At 35, the Rev. Martin Luther King Jr. became the youngest person to receive the Nobel Peace Prize when his work to end racial discrimination in the United States through nonviolent means was recognized in 1964. His "I Have a Dream" speech, which he delivered one year earlier from the steps of the Lincoln Memorial to a crowd of 200,000, was but one of many famous and influential speeches King gave as a leader in the civil rights movement.

Heisenberg received the physics prize in 1932 for discovering the underlying principles of quantum mechanics, the rules that govern the behavior of subatomic particles.

Quantum mechanics completely changed our understanding of reality. It says that light, electrons, atoms and, indeed, all things act simultaneously like particles and like waves. The so-called "uncertainty principle" follows from that; it states that it is impossible to know with perfect accuracy both a particle's position and its velocity. Know where a particle is, and you have no idea where it is going, or how fast. Yet another curious aspect of quantum mechanics is that it shows there is no reality — at least not on the atomic scale — that exists independently of our observations of it.

Sartre was one of the leading figures in 20th-century French philosophy, particularly Marxism and existentialism. He was awarded the 1964 Nobel Prize in Literature but refused it, saying he did not wish to be "transformed" by such an award and did not want to take sides in an East vs. West cultural struggle by accepting an award from a prominent Western cultural institution.

Sartre published his treatise on existentialism, "Being and Nothingness," in 1943. Together, he and French author Albert Camus (who won the Nobel Prize for Literature in 1957) popularized the existentialist movement, which emphasized the experience of living rather than focusing on universal truths or moral obligations.

Mother Teresa, a Roman Catholic nun of Albanian ethnicity and Indian citizenship, founded the Missionaries of Charity in Calcutta, India, in 1950.  She spent the next 45 years ministering to the poor, sick, orphaned and dying, while overseeing the Missionaries of Charity's gradual expansion throughout and beyond India. At the time of her death in 1997, there were 610 missions in 123 countries, including hospices and homes for people with HIV, leprosy and tuberculosis; soup kitchens; children's and family counseling programs; orphanages and schools.

Mother Teresa won the Nobel Peace Prize in 1979. Following her death, she was beatified by Pope John Paul II — made a saint — and given the title Blessed Teresa of Calcutta.