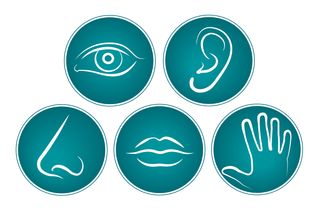 Humans have five basic senses: touch, sight, hearing, smell and taste. The sensing organs associated with each sense send information to the brain to help us understand and perceive the world around us. People also have other senses in addition to the basic five. Here's how they work.

Touch is thought to be the first sense that humans develop, according to the Stanford Encyclopedia of Philosophy. Touch consists of several distinct sensations communicated to the brain through specialized neurons in the skin. Pressure, temperature, light touch, vibration, pain and other sensations are all part of the touch sense and are all attributed to different receptors in the skin.

Touch isn't just a sense used to interact with the world; it also seems to be very important to a human's well-being. For example, touch has been found to convey compassion from one human to another.

Touch can also influence how humans make decisions. Texture can be associated with abstract concepts, and touching something with a texture can influence the decisions a person makes, according to six studies by psychologists at Harvard University and Yale University, published in the June 24, 2010, issue of the journal Science.

"Those tactile sensations are not just changing general orientation or putting people in a good mood," said Joshua Ackerman, an assistant professor of marketing at the Massachusetts Institute of Technology. "They have a specific tie to certain abstract meanings." [Just a Touch Can Influence Thoughts and Decisions]

Sight, or perceiving things through the eyes, is a complex process. First, light reflects off an object to the eye. The transparent outer layer of the eye called the cornea bends the light that passes through the hole of the pupil. The iris (which is the colored part of the eye) works like the shutter of a camera, retracting to shut out light or opening wider to let in more light.

"The cornea focuses most of the light. Then, it [the light] passes through the lens, which continues to focus the light," explained Dr. Mark Fromer, an ophthalmologist and retina specialist at Lenox Hill Hospital in New York City. [How the Human Eye Works]

The lens of the eye then bends the light and focuses it on the retina, which is full of nerve cells. These cells are shaped like rods and cones and are named for their shapes, according to the American Optometric Association. Cones translate light into colors, central vision and details. The rods translate light into peripheral vision and motion. Rods also give humans vision when there is limited light available, like at night. The information translated from the light is sent as electrical impulses to the brain through the optic nerve.

People without sight may compensate with enhanced hearing, taste, touch and smell, according to a March 2017 study published in the journal PLOS One. Their memory and language skills may be better than those born with sight, as well.

"Even in the case of being profoundly blind, the brain rewires itself in a manner to use the information at its disposal so that it can interact with the environment in a more effective manner," Dr. Lotfi Merabet, senior author on that 2017 study and the director of the Laboratory for Visual Neuroplasticity at Schepens Eye Research Institute of Massachusetts Eye and Ear, said in a statement.

This sense works via the complex labyrinth that is the human ear. Sound is funneled through the external ear and piped into the external auditory canal. Then, sound waves reach the tympanic membrane, or eardrum. This is a thin sheet of connective tissue that vibrates when sound waves strike it.

The vibrations travel to the middle ear. There, the auditory ossicles — three tiny bones called the malleus (hammer), incus (anvil) and stapes (stirrup) — vibrate. The stapes bone, in turn, pushes a structure called the oval window in and out, sending vibrations to the organ of Corti, according to the National Library of Medicine (NLM). This spiral organ is the receptor organ for hearing. Tiny hair cells in the organ of Corti translate the vibrations into electrical impulses. The impulses then travel to the brain via sensory nerves.

People retain their sense of balance because the Eustachian tube, or pharyngotympanic tube, in the middle ear equalizes the air pressure in the middle ear with the air pressure in the atmosphere. The vestibular complex, in the inner ear, is also important for balance, because it contains receptors that regulate a sense of equilibrium. The inner ear is connected to the vestibulocochlear nerve, which carries sound and equilibrium information to the brain.

"The fact is the sense of smell is just as good in humans as in other mammals, like rodents and dogs," John McGann, a neuroscientist at Rutgers University-New Brunswick in New Jersey and the author of the new review, said in a statement. The Rutgers study backs up a previous study at the Rockefeller University in New York, whose findings were published in the March 2014 issue of the journal Science. [People Smell Great! Human Sniffers Sensitive as Dogs']

Humans have 400 smelling receptors. While this isn't as many as animals that are super smellers have, the much more complicated human brain makes up for the difference, McGann said.

In fact, poor smelling ability in people may be a symptom of a medical condition or aging. For example, the distorted or decreased ability to smell is a symptom of schizophrenia and depression. Old age can also lessen the ability to smell properly. More than 75 percent of people over the age of 80 years may have major olfactory impairment, according to a 2006 paper published by the National Institutes of Health.

The gustatory sense is usually broken down into the perception of four different tastes: salty, sweet, sour and bitter. There is also a fifth taste, defined as umami or savory. There may be many other flavors that have not yet been discovered. Also, spicy is not a taste. It is actually a pain signal, according to theNational Library of Medicine (NLM).

The sense of taste aided in human evolution, according to the NLM, because taste helped people test the food they ate. A bitter or sour taste indicated that a plant might be poisonous or rotten. Something salty or sweet, however, often meant the food was rich in nutrients.

Taste is sensed in the taste buds. Adults have 2,000 to 4,000 taste buds. Most of them are on the tongue, but they also line the back of the throat, the epiglottis, the nasal cavity and the esophagus. Sensory cells on the buds form capsules shaped like flower buds or oranges, according to the NLM. The tips of these capsules have pores that work like funnels with tiny taste hairs. Proteins on the hairs bind chemicals to the cells for tasting.

It is a myth that the tongue has specific zones for each flavor. The five tastes can be sensed on all parts of the tongue, although the sides are more sensitive than the middle. About half of the sensory cells in taste buds react to several of the five basic tastes. The cells differ in their level of sensitivity, according to the NLM. Each has a specific palette of tastes with a fixed ranking, so some cells may be more sensitive to sweet, followed by bitter, sour and salty, while others have their own rankings. The full experience of a flavor is produced only after all of the information from the different parts of the tongue is combined.

The other half of the sensory cells are specialized to react to only one taste. It's their job to transmit information about the intensity — how salty or sweet something tastes.

Other factors help build the perception of taste in the brain. For example, the smell of the food greatly affects how the brain perceives the taste. Smells are sent to the mouth in a process called olfactory referral. This is why someone with a stuffy nose may have trouble tasting food properly. Texture, translated by the sense of touch, also contributes to taste.

The sense of space

In addition to the traditional big five, there is another sense that deals with how your brain understands where your body is in space. This sense is called proprioception.

Researchers at the National Institutes of Health (NIH) found that people who have particularly poor proprioception through mechanosensation — the ability to sense force, such as feeling when someone presses down on your skin — may have a mutated gene that is passed down from generation to generation. That comes from a September 2016 study in the New England Journal of Medicine. "The patient's version of [the gene] PIEZO2 may not work, so their neurons cannot detect touch or limb movements," Alexander Chesler, a principal investigator at the National Center for Complementary and Integrative Health and the lead author of the study, said in a statement.

There are more-subtle senses that most people never really perceive. For example, there are neuron sensors that sense movement to control balance and the tilt of the head. Specific kinesthetic receptors exist for detecting stretching in muscles and tendons, helping people to keep track of their limbs. Other receptors detect levels of oxygen in certain arteries of the bloodstream.

Sometimes, people don't even perceive senses the same way. People with synesthesia can see sounds as colors or associate certain sights with smells, for example.