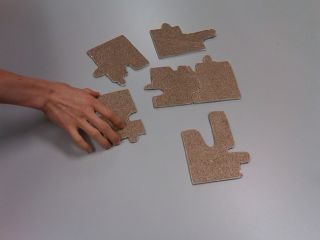 Touching rough puzzle pieces with surfaces resembling sandpaper influenced the thoughts and decisions of people in an experiment.
(Image: © Science/AAAS)

Touching a soft or hard object can influence how a person thinks or even makes decisions, researchers now say.

The same goes for the sensations of feeling smooth or rough objects, and holding heavy or light objects, according to a series of six experiments. Such tactile sensations may encourage thoughts of abstract concepts connected to touch-related metaphors, and could affect how people haggle over the price of a new car or negotiate high-stakes diplomacy.

For instance, hardness may evoke concepts of stability, rigidity and strictness. Roughness can lead to thoughts of difficulty and harshness, while heaviness conjures up impressions of importance and seriousness.

"Those tactile sensations are not just changing general orientation or putting people in a good mood," said Joshua Ackerman, an assistant professor of marketing at MIT in Boston, Mass. "They have a specific tie to certain abstract meanings."

Ackerman developed the six studies with psychologists at Harvard University in Boston and Yale University in New Haven, Conn. Their work is detailed in the June 24 issue of the journal Science.

The researchers pointed out that touch develops first among the human senses, and yet it tends to receive the least attention from scientists or others.

More than a feeling

Holding heavy or light clipboards influenced how seriously people reacted to scenarios in the first two studies. Heavy-clipboard holders rated job candidate resumes as being more serious, but did not rate candidates higher on the metaphorically irrelevant trait of social likeability.

But the weight of the clipboards did not affect how much men or women allocated to less important issues, such as regulation of public bathrooms.

People who played with rough puzzle pieces that felt like sandpaper rated a neutral social interaction as being more difficult or harsh, compared with people who handled smooth puzzle pieces, in the third study.

A more complicated result arose from the fourth study's ultimatum game, where participants could choose to share 10 tickets for a $50 lottery with an anonymous (fake) participant. The anonymous participant could either accept the offer or reject it, so that rejection led to neither person getting anything.

Rough puzzle handlers chose to offer more tickets. That may reflect how the participants viewed the other player as potentially being difficult or "tough cookies," and so they became more generous to compensate for the higher risk of a doomed negotiation.

"We were a little bit surprised that people were being more generous," Ackerman told LiveScience. "It suggests that people are not just being negative."

Hardness came into play during the fifth study, where participants touched either a soft blanket or a hard block of wood. Those who felt the hard block rated an employee in a boss-employee interaction as being more rigid or unyielding, but did not view the employee more negatively.

Perhaps the most unexpected result came out of the last study, where participants did not use their hands at all. Instead, they sat on either a hard or soft chair as they negotiated the price of a new car with the sticker price $16,500, and had the chance to place two bids.

That effect of even a passive touch shocked Ackerman and his colleagues, who had come up with the sixth study almost on a whim. It also inspired them to tackle a seventh study, which was not included in the official write-up.

Participants who played with rough or smooth puzzle pieces then had to try walking a drawn tightrope on the ground. People who had touched the rough puzzle pieces ended up falling off the "tightrope" more often – a result that the researchers hope to investigate more in the future.

You've got the touch

All these studies support an idea proposed by Ackerman and his colleagues known as scaffolding, where humans learn to grasp abstract mental concepts by relying upon physical sensations. Both scaffolding and the related concept known as neural reuse have gained support over the years, but remain debated among scientists.

Many companies may neglect touch during their marketing campaigns, if only because many consumers first encounter a product or advertising slogan at a distance.

Still, some companies do pay attention. Ackerman pointed to Apple's Macs, iPads and iPhones with their smooth, rounded edges, which may convey a sense of ease.