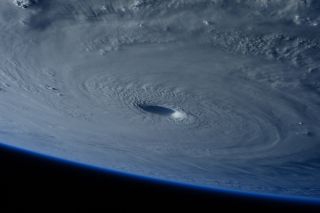 A cyclone's eye is a place of safety and a sign of danger. Inside the eye, winds are calm and no rain falls. Blue skies are usually visible overhead. But ending up inside a storm's eye is bad news — the eye is ringed by the eye wall, where the storm's most powerful winds swirl. And when an eye forms, it's a sign that a cyclone has grown more organized, and more powerful. It's a key step on the road to becoming a fully-fledged hurricane..

So, meteorologists watch cyclonic eyes carefully. Those strange, still spots convey invaluable information about what destruction a storm will wreak. And yet, despite researchers' intense focus on the phenomena, cyclone eyes are barely understood. A paper published in 2006 found hundreds of explanations for cyclone eye formation, many of them explicitly contradicting one another.

But a new paper by a physicist, an applied mathematician and an engineer, published today (Jan. 12) in the journal Physical Review Fluids, may help narrow the field.

The problem with modeling and figuring out the eye, the author wrote, is that the interior structures of hurricanes (and other cyclones) are governed by a number of competing forces and phenomena — things like turbulence and several differently behaving layers — that are each either highly complex or poorly understood. And when several complex systems interact, particularly those that have yet to divulge any information, the results are that much more complex. [50 Amazing Tornado Facts]

This is a basic problem of fluid mehanics, as well as meteorology, the researchers wrote.

"Despite [eyes'] common appearance … it is not even clear that the same basic mechanisms are responsible in different classes of atmospheric vortices," the scientists wrote. "In the absence of such a fundamental understanding, one cannot reliably predict when eyes should, or should not, form."

The researchers built what they termed the most complex model of an atmospheric cyclone yet developed, expanding on an earlier model they had developed and described in a paper published in the Journal of Fluid Mechanics in January 2017.

"One must be cautious in such attempts," to model a cyclonic eye, they wrote in the 2018 paper, "and it is important to stress that certain essential characteristics of atmospheric vortices have been dropped in the present model. These include vertical stratification [those layers mentioned earlier], spatially varying and anisotropic eddy viscosity [weird internal forces governing how the air might bump and jiggle], as well as latent heat release due to water vapour condensation."

Still, they wrote, their model is a reasonable, simplified analog for the kinds of tropical storms that emerge in real-world conditions.

For an eye to form in their model, the researchers found, the cyclone has to fit four boundary conditions. Knowing these isn't super important to getting the basic point of this paper, so feel free to scroll past the list. But here it is for the curious:

The important point here is that, at least in this simplified model, a cyclone's eye forms when the storm's internal friction, its speed and the force of the spinning Earth acting on the storm all strike a delicate balance.

It's important to note, the researchers said, that these results don't fully answer the question of why eyes form in hurricanes — too many factors are left out, and it's entirely possible their model doesn't model hurricanes as well as they expect. (Their model also definitely doesn't cover other forms of atmospheric cyclones, like tornadoes.)

What this research does do, they write, is point the way forward in answering some basic questions about hurricanes. Namely: Why do they form the way they do, and how can meteorologists better predict the storms' behavior?