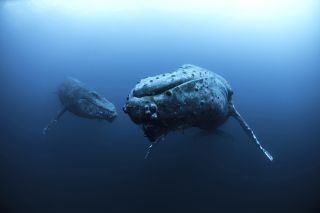 On Friday (Nov. 24), President Nieto signed a decree to create the Revillagigedo Archipelago National Park in a region of the Pacific Ocean that surrounds four volcanic islands: Claríon, Roca Partida, Socorro and San Benedicto. The islands, which are uninhabited by people, are located about 240 miles (390 km) to the southwest of Cabo San Lucas, on the southern tip of the Baja California peninsula.

Remarkably diverse communities of ocean life call these waters home. These organisms include four species of sea turtles, more than 37 species of sharks and rays, and at least 366 species of fish, dozens of which are found nowhere else on Earth, representatives of the Pew Bertarelli Ocean Legacy Project (PBOLP) said in a statement. The PBOLP nonprofit collaborated with Mexican conservation organizations and federal officials to establish the reserve. [In Photos: Mexico's New Ocean Reserve Protects Stunning Biodiversity]

The Revillagigedo Archipelago also serves as an important route for migratory marine animals, such as seabirds, dolphins, whales, sea turtles, tunas and sharks, with humpback whales lingering in the area throughout the winter months, according to the statement.

In July 2016, the United Nations Educational, Scientific and Cultural Organization (UNESCO) recognized the archipelago as a World Heritage site in recognition of the area's outstanding natural beauty and importance as a habitat for threatened species, UNESCO officials announced that year in a statement. President Nieto's declaration prohibits gas and oil extraction, commercial fishing, and development for tourism in the area, ensuring that human activity will not disrupt the ecosystems, PBOLP Director Matt Rand told Live Science.

"This decree will create a gold standard for marine conservation, a sanctuary for ocean life," Rand said.

Around the archipelago, two ocean currents converge over seamounts, underwater mountain ranges on the seafloor. Volcanic peaks from these mountains emerge above sea level, forming the islands of the archipelago. Together, the seamounts, the movement of the currents and nutrients in the waters give rise to ecosystems where diverse species large and small can collect and thrive, Rand explained.

Actions that protect Earth's ocean environments are critically important right now, he said. In recent years, much of the world's oceans have undergone worrying drops in top predatory fish populations, such as sharks, because of overfishing, which upsets the balance in marine food webs, Rand said.

"And then, on top of that, we're starting to see significant decline [in fish populations] because of climate change. Waters are warming, becoming more acidic and, in some instances, deoxygenated," he said.

Large-scale marine reserves are not only more resilient to the impacts of climate change; they are also more likely to keep their own ecosystems intact and can even help to replenish ocean environments that have been depleted, Rand said. This is particularly true of coral reef ecosystems, which have been especially hard-hit by climate change, he said.

"It's called the spillover effect," he explained. "If we have healthy ecosystems that are fully populated, we have corals spawning. The polyps travel and can regenerate coral reefs in areas at significant distances, hundreds or thousands of miles."

To maintain healthy and sustainable ocean ecosystems, scientists and the International Union for Conservation of Nature (IUCN) have recommended that at least 30 percent of the world's oceans be designated as protected areas, according to the PBOLP. And we have a long way to go to get there, Rand told Live Science. Currently, less than 10 percent of the ocean is protected at all, and under 2 percent is fully protected from all types of natural-resource extraction and development, he said. [Marine Marvels: Spectacular Photos of Sea Creatures]

However, there have been promising steps toward this objective. In early 2016, U.S. President Barack Obama expanded the Papahānaumokuākea Marine National Monument off the coast of Hawaii to cover more than 582,000 square miles (1.5 million square km) in the Pacific Ocean. And then, in October 2016, the Commission for the Conservation of Antarctic Marine Living Resources (CCAMLR) voted to create the world's biggest marine protected area in waters near Antarctica, designating a reserve in which 598,000 square miles (1.55 million square km) in the Southern Ocean would be off-limits to commercial fishing, Live Science previously reported.

Also underway are proposals to create the Kermadec Ocean Sanctuary in New Zealand, home to the second-deepest trench on the ocean floor; the Coral Sea Marine Reserve in Australia; New Caledonia's Natural Park of the Coral Sea; and the South Sandwich Islands, where half of the world's penguins live, Rand told Live Science.

"But with the impacts of increasing commercial extraction and climate change, the science is clear — 30 percent of the ocean needs to be protected. We need to continue to push the needle on marine reserves. We need a serious uptick globally to reach that goal," he said.