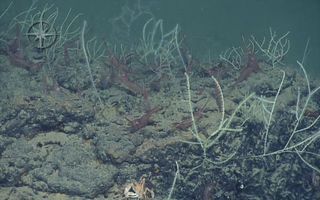 An area of deep-sea coral reefs has just been discovered off the coast of Israel, the first such reef to be found in what is generally considered a region with sparse sea life.

The exploration vessel Nautilus, operated by an American crew with a team of experts from the University of Haifa in Israel aboard, discovered the deep-sea corals.

"We did not expect, know or even imagine that we would come across these reefs and certainly not such large ones. It's like finding a flourishing oasis in the middle of the desert," said Yizhaq Makovsky, who directed the University of Haifa control center for the project.

The discovery of these coral reefs has broad scientific importance. They can help researchers to better understand the mechanisms of survival in the environmental conditions of the deep sea, as well as to determine how these conditions correlate with the effect of global changes over time.

In-depth research on sea-bed samples from the area has yet to be completed, but additional discoveries include two shipwrecks – probably modern boats that sunk over the past few decades; and fish and crabs that were photographed in their natural habitat for the first time, hundreds of meters beneath the Mediterranean surface.

"This cruise has provided a nutshell sampling of this maritime region, but our discovery only demonstrates the potential of the many surprises that await us in the depths of this area," Makovsky said. "An immediate implication of this discovery is that there is an urgent need to classify the area as a deep-sea reserve, as are other coral reef areas around the world."