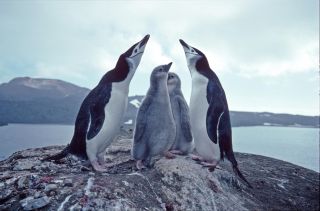 The hatcheries of migratory penguins can be magical places, full of fluffy chicks and doting parents. But things are less picturesque when you add volcanic ash to the mix. A volcano on the northernmost island of an archipelago in the South Atlantic Ocean has been spewing ash and smoke since March, threatening one of the largest colonies of penguins in the world, according to a new study.

Zavodovski Island, one of the South Sandwich Islands, is uninhabited by humans, but it is home to more than 1 million chinstrap penguins, according to the British Antarctic Survey (BAS). BAS researchers found the volcanic eruption via satellite imagery and fishermen from nearby South Georgia were able to photograph ash blowing eastward across the island over penguin-nesting grounds.

“We donꞌt know what impact the ash will have on the penguins," Peter Fretwell, a geographer with the BAS, said in a statement. "If it has been heavy and widespread it may have a serious effect on the population." [Charming Chick Photos: Antarctica's Baby Penguins]

The chinstrap penguin(Pygoscelis antarctica) stands about 30 inches (75 centimeters) tall and eats mostly krill (tiny crustaceans). These penguins are abundant throughout the sub-Antarctic region, and there are at least 8 million in the wild, according to the International Union for Conservation of Nature.

The penguins forage at sea from March until November, when they return to their colonies to breed. When the eruption began in March, some straggling penguins may have still been molting, shedding old feathers and growing new ones, and were unable to leave the island, said Wayne Trivelpiece, a biologist with the National Marine Fisheries Service who has studied penguins for 40 years.

There is evidence of prior volcanic activity on Zavodovski Island, according to the BAS, but the extent of that volcanism and its effect on wildlife on the remote island are unknown. Two expeditions are planned later this year to evaluate damage from the eruption, Fretwell said.

But the main effects of the eruption, Trivelpiece said, won't be known until the penguins return to the island, where 10 to 15 percent of the world's chinstraps nest. "If the ash covers everything, that will make a difference," he said, "That's not going to be good terrain to lay eggs in."

Ultimately, like the BAS, Trivelpiece is taking a wait-and-see approach in assessing the effects of the eruption by Mount Curry on the island's penguin population. He said the ash could be blown out to sea, or the "very adaptable" chinstraps may find alternative nesting grounds.