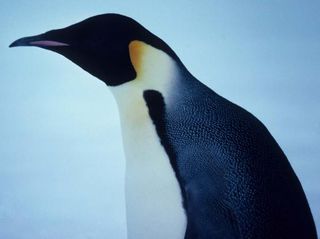 Penguins are torpedo-shaped, flightless birds that live in the southern regions of the Earth. Though many people imagine a small, black-and-white animal when they think of penguins, these birds actually come in a variety of sizes, and some are very colorful.

For example, crested penguins sport a crown of yellow feathers. Blushes of orange and yellow mark the necks of emperor and king penguins. What look like bright yellow, bushy eyebrows adorn the heads of some species, such as the Fiordland, royal, Snares and rockhopper penguins. The macaroni penguin's name comes from the crest of yellow feathers on its head, which looks like the 18th-century hats of the same name. A light yellow mask covers the face of the yellow-eyed penguin around the eyes.

According to the Integrated Taxonomic Information System (ITIS), there are 19 species of penguin. (Some experts, however, say the eastern rockhopper is a subspecies of the southern rockhopper.) [Gallery: Photos of 18 Penguin Species]

Where do penguins live?

Considered marine birds, penguins live up to 80 percent of their lives in the ocean, according to the New England Aquarium. All penguins live in the Southern Hemisphere, though it is a common myth that they all live in Antarctica. In fact, penguins can be found on every continent in the Southern Hemisphere. It is also a myth that penguins can only live in cold climates. The Galapagos penguin, for example, lives on tropical islands at the equator.

What do penguins eat?

The yellow-eyed penguin is very tenacious when foraging for food. It will dive as deep as 120 meters (393.70 feet) up to 200 times a day looking for fish, according to the Yellow-Eyed Penguin Trust.

A group of penguins is called a colony, according to the U.S. Geological Survey. During breeding season, penguins come ashore to form huge colonies called rookeries, according to Sea World.

Most penguins are monogamous. This means that male and female pairs will mate exclusively with each other for the duration of mating season. In many cases, the male and female will continue to mate with each other for most of their lives. For example, research has found that chinstrap penguins re-paired with the same partner 82 percent of the time and gentoo penguins re-paired 90 percent of the time.

At around three to eight years old, a penguin is mature enough to mate. Most species breed during the spring and summer. The male usually starts the mating ritual and will pick out a nice nesting site before he approaches a female.

After mating, the female emperor or king penguin will lay a single egg. All other species of penguins lay two eggs. The two parents will take turns holding the eggs between their legs for warmth in a nest. The one exception is the emperor penguin. The female of this species will place the egg on the male's feet to keep warm in his fat folds while she goes out and hunts for several weeks.

When penguin chicks are ready to hatch, they use their beaks to break through the shell of their eggs. This process can take up to three days. After the chicks emerge, the parents will take turns feeding their offspring with regurgitated food. Penguin parents can identify their offspring by unique calls that the chick will make.

The taxonomy of penguins, according to ITIS, is:

According to the Red List of Threatened Species from the International Union for Conservation of Nature, four penguin species are endangered: northern rockhopper, erect-crested, yellow-eyed, jackass and Galapagos penguins. Most of the other species of penguins are listed as vulnerable or threatened.

The chinstrap penguin has a stripe of black that runs from one side of its head to the other. This strip looks like a chinstrap.

The shape of all penguins makes them aerodynamic. It is the perfect shape for gliding through the water as they swim.

Most birds have hollow bones. Penguins do not. Their heavier bones counteract the birds' natural buoyancy, making them very quick swimmers. Penguins can swim up to 15 mph (24.14 kph) according to the World Wildlife Fund.

Rockhoppers do not glide on their bellies like other penguins. They instead hop from rock to rock to move across land quickly.