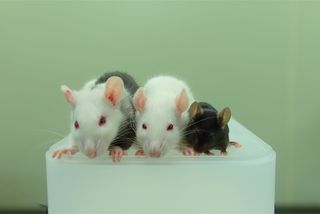 This photo shows, from left to right, a rat-mouse chimera, a rat and a mouse. The rat-mouse chimera was made by injecting mouse pluripotent stem cells into a rat embryo.
(Image: © Tomoyuki Yamaguchi)

In a recent experiment to help out mice that were missing their pancreases, scientists grew new pancreases from mouse stem cells in the bodies of rats, and then transplanted those pancreases into the mice.

The researchers found that this technique could reverse diabetes in the mice, according to a new study. Moreover, this strategy of growing the organs of one species inside the body of another could one day help to produce transplantable human organs grown in large animals, such as pigs or sheep, the researchers said.

The work holds promise for alleviating the severe shortage of donated human organs, they said. "However, there is a much greater evolutionary distance between humans and pigs or sheep than there is between mice and rats, and this could create challenges," said the study's senior author, Hiromitsu Nakauchi, a stem cell biologist at the Stanford University School of Medicine in California. "So much more research needs to be done to ensure that this approach is both safe and effective."

Currently, there are more than 76,000 patients in the United States awaiting organ transplants, according to the U.S. Department of Health and Human Services. [10 Technologies That Will Transform Your Life]

In the new study, scientists explored interspecies organ growth with rats and mice, which are closely related.

The scientists used pluripotent stem cells, which, in principle, can become any type of cell in the body.

In 2010, Nakauchi and his colleagues used such cells to grow a rat pancreas in a mouse. However, the organ grew to only the size of a normal mouse pancreas, and was therefore not big enough to be transplanted into the much larger rat and tested to see if it worked. In the new study, the scientists attempted the opposite experiment: growing a mouse pancreas in a rat. [Top 3 Techniques for Creating Organs in the Lab]

The researchers injected mouse pluripotent stem cells into embryonic rats that had been conceived just a few days earlier and were genetically modified to lack the ability to grow their own pancreas. The pancreas produces insulin, the hormone that helps the body control blood sugar levels. Type 1 diabetes results when the pancreas cannot produce enough insulin. Currently, about 1.25 million Americans have type 1 diabetes, according to the American Diabetes Association.

These implanted mouse cells developed into pancreases that were the appropriate size for rats and had the key, insulin-secreting "islet cells."

The transplants successfully returned the blood sugar levels of the mice to normal for more than a year. The scientists detailed their findings in the Jan. 26 issue of the journal Nature.

After about 10 months, the researchers removed the islets from some of the mice for inspection. "We examined them closely for the presence of any rat cells, but we found that the mouse's immune system had eliminated them," Nakauchi said in a statement. "This is very promising for our hope to transplant human organs grown in animals, because it suggests that any contaminating animal cells could be eliminated by the patient's immune system after transplant."

Moreover, the scientists did not see any signs of tumor formation or other abnormalities caused by the implanted pluripotent mouse stem cells. Tumor formation is often a concern when pluripotent stem cells are used in animals because of their ability to become any cell in the body.

The researchers cautioned that many ethical and legal challenges remain when it comes to using human stem cells in animal embryos.

"Many researchers and ethicists are concerned that injecting human pluripotent cells into an animal embryo could result in an animal with a larger proportion of human cells throughout their body than was anticipated, including perhaps in the brain or the germ cells that give rise to the sperm and egg," Nakauchi told Live Science. "Researchers take these concerns seriously, and are working to come up with ways to avoid this outcome without compromising the field's promise."

Nakauchi acknowledged that people may feel that researchers pursuing this type of study are creating unnatural, monster-like creatures. However, "these animals simply consist of two genetically different types of cells," he said in an email. "They are not new species, and they cannot reproduce themselves through mating."

The researchers said they are now working on similar experiments to generate kidneys, livers and lungs.

Qiao Zhou, an associate professor of stem cell and regenerative biology at Harvard University, who did not participate in this work, said interspecies organ growth may face many technical challenges. For example, in a commentary published online Jan. 25 in the journal Nature, Zhou noted that although mouse immune systems could efficiently get rid of rat cells in this work, when it comes to larger organs, deeply embedded contaminating cells may not be so easy to remove, potentially leading to strong immune responses that could cause substantial organ damage.