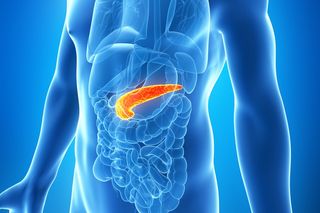 A body part that many would wish away — their love handles — can be turned it into life-saving transplant: Researchers reprogramed fat cells from a person's waistline into pancreatic cells capable of producing the crucial hormone insulin.

If further testing shows that the cells are safe to implant into a person's body, and effectively produce insulin once they are there, they could one day be used to treat people with either type 1 or type 2 diabetes, experts say.

In a petri dish, researchers coaxed these reprogrammed pancreatic cells, called beta cells, to produce ample amounts of the hormone insulin, which helps the body turn food into fuel for muscles and organs such as the brain.

"We're very confident that we're the closest to natural beta cells which you can get," said study co-author Martin Fussenegger, a bioengineer at ETH Zurich, a science and technology university in Switzerland. [Inside Life Science: Once Upon a Stem Cell]

Normally, when food is broken down, levels of glucose (or sugar) rise in the blood, and in response, the cells of the pancreas produce insulin and release it into the bloodstream. Insulin then binds to receptors on cells throughout the body, essentially unlocking them and allowing body cells to absorb glucose from the bloodstream and use it for energy.

For decades, researchers tried to find ways to treat people with type 1 diabetes by implanting pancreatic cells from people who had died. However, there is a shortage of pancreatic cells for transplant, and people who received these transplants had to take powerful immune-system-suppressing drugs to prevent the body from rejecting the foreign tissue.

To get around that obstacle, some researchers have focused on finding ways to reprogram a person's own cells to become pancreatic beta cells. For instance, earlier this year, researchers turned skin cells in insulin-producing beta cells.

The first step in this line of research is to take cells from a patient and turn back the clock on them, so they are stem cells, meaning they can turn into many different cell types. Researchers then have to persuade the cells to become pancreatic beta cells, through a process called differentiation. [How Stem Cell Cloning Works: Infographic]

In previous work, researchers "threw all kinds of chemicals and factors on them to make them differentiate, and that was kind of trial and error," Fussenegger told Live Science.

The cells that resulted acted similar to, but not exactly like, normal human pancreatic beta cells. For instance, the cells did not produce as much insulin as normal cells do in response to rising blood sugar levels, Fussenegger said.

To produce better replicas of beta cells, Fussenegger and his colleagues took a closer look at the tightly choreographed rise and fall of chemical signals that cause stem cells to become mature beta cells during normal embryonic development. Then, the team created a genetic program to produce these chemical signals at just the right time, and inserted the program into a virus.

Next, they harvested fat from a 50-year-old woman and converted the fat cells into stem cells. Then, they inserted their genetic program, and coaxed the cells to become beta cells. Once the cells were mature, the viral DNA was gradually removed by ordinary cellular processes, so that no extra genetic material was left behind in the cells, Fussenegger said.

In a petri dish, the cells behaved much more like real pancreatic beta cells than previous reprogrammed stem cells had, the researchers reported Monday (April 11) in the journal Nature Communications.

"The glucose responsiveness of those beta cells, which is the hallmark of beta cells, was practically identical to human islet cells that are used for transplantation," Fussenegger said.

Long road to a cure

The next step will be to find a suitable animal model to see if the cells work similarly in animals.

The new technique is a "'Star Trek,' starship Enterprise kind of thing: designer genes, designer cells, synthetic switches," said Dr. Joel Habener, a physician and molecular endocrinologist at Harvard University who was not involved in the study. "It's pretty ingenious, I think."

The cells that the researchers made do an impressive job of producing insulin in response to glucose, or sugar concentrations, just as normal beta cells do, Habener said.

However, the cells still need to be tested in animals, such as mice, to make sure they are safe, Habener added. Then, the cells could be tested in human patients in five to 10 years, Fussenegger said.