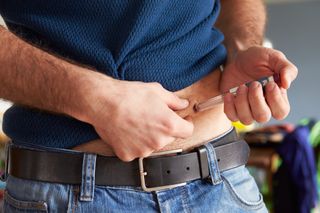 Josh Wilkerson began taking over-the-counter insulin for his type 1 diabetes when he aged off his stepfather's health insurance policy at age 26. But compared with the insulin Wilkerson had previously taken, the less expensive medication was difficult to use and left more room for error. Within a year, the young man — who was saving money for his upcoming wedding — was dead, according to reporting by The Washington Post.

As the price of insulin surges, heartbreaking stories like Wilkerson's are becoming more common. Some people with diabetes in the U.S. travel to Mexico or Canada, where insulin is sold at a fraction of the U.S. cost. Others ration insulin, a risky move that can lead to a host of medical problems, including mood swings, severe dehydration, increased infection risk, kidney and eye problems, limb amputation and even death.

In many cases, people like Wilkerson switch from the expensive but easier-to-use "analogue" human insulins to the more-difficult-to-use traditional insulins (we'll explain the difference later) but then struggle to correctly time and partition each dose. Here's why this switch can be so challenging and how medical professionals can help patients do it safely.

More than 100 million adults in the United States have diabetes or prediabetes, according to a 2017 report from the Centers for Disease Control and Prevention. Many people with diabetes need supplemental insulin, a hormone normally made in the pancreas. When people eat a meal, their blood sugar, or glucose, rises. Like a traffic cop, insulin enters the bloodstream, where it signals cells to absorb these sugars, so that the nutrients can then be used for energy.

If they didn't take insulin, people with diabetes would experience high blood sugar, or hyperglycemia, after eating. "[Insulin's] job is to prevent the rise in sugar after a meal or after stress," said Dr. Kathleen Wyne, an endocrinologist at The Ohio State University Wexner Medical Center, who was not involved with Wilkerson's case. Many people with diabetes also need supplemental insulin to maintain their basic metabolic function, even when they are not eating.

People with type 1 diabetes, whose bodies may make no insulin, "have a finer margin of error, where if they take too much [insulin], they can cause severe low glucose," Wyne told Live Science. In contrast, people with type 2 diabetes make some insulin in their bodies but not enough (and usually less as they age).

Diabetes used to be a death sentence. But it became a treatable, chronic condition after two Canadian scientists extracted active insulin from an animal pancreas in 1921. They treated their first patient in 1922 and later sold their patented technique to the University of Toronto for $1, saying that their goal was not profit but rather public health, according to a 2015 piece in The New England Journal of Medicine. However, the researchers soon realized they could not produce enough insulin to meet the demands of the North American markets. As a result, the university then allowed drug companies to make insulin and patent any improvements.

Over the decades, this has led to skyrocketing insulin costs. While researchers have made major advancements, incremental improvements have essentially kept insulin under patent for more than 90 years, which partly explains why there are hardly any generic insulins on the market, according to the 2015 report. (Pharmaceutical company Eli Lilly announced in March that it would release a generic, Insulin Lispro, but this insulin's retail price still costs more than $100 a vial, according to goodrx.com.)

"Nearly a century after its discovery, there is still no inexpensive supply of insulin for people living with diabetes in North America, and Americans are paying a steep price for the continued rejuvenation of this oldest of modern medicines," the authors of the New England Journal of Medicine study wrote.

Before the newer insulins came onto the market, people with diabetes would get their insulins in a vial and deliver them with a syringe, injecting either a regular (also known as short-acting or "R") insulin before a meal and "neutral protamine Hagedorn" (of NPH, an intermediate-acting insulin) once or twice a day. Regular insulin had to be taken about 30 minutes before a meal, so people had to know when they were eating, Wyne said.

People with diabetes could also get a vial that had a mixture of regular and NPH insulin, which decreased daily injections, she said.

But then, vials and syringes went out of fashion as injector pens with more-efficient, short-acting insulins came onto the market.

That brings us to the current crisis. Wyne remembers insulin prices started creeping up with the 1996 introduction of the short-acting insulin Humalog, made by Eli Lilly. Because it worked within 15 minutes, Humalog allowed people to inject insulin right as they sat down to eat.

Humalog was the first analogue (meaning it's lab grown) insulin that came onto the market. It initially sold for $21 a vial, about a month's supply, Wyne said. Over the next 20 years, that price increased more than 30 times, and five injector pens, about the equivalent of a vial, now have a retail price of more than $300, according to a recent goodrx.com search. (A vial is less expensive, selling at a retail price of $165 to $195, another goodrx search showed.)

Meanwhile, glargine (brand name Lantus), the first replacement for the longer-acting NPH, came to the U.S. in 2001. At that time, it was $35 a vial; now it is $270, according to IBM Watson Health, as reported by The Washington Post. (Most people with type 1 diabetes will need to have vials of each.)

It's important to note that, despite several caveats, the old and new insulins are fairly similar, said Dr. Robert Rushakoff, a professor of medicine at the University of California, San Francisco (UCSF) and medical director for inpatient diabetes at UCSF Medical Center.

"With the introduction of the more-rapid-acting insulins, like aspart, Humalog and NovoLog, the difference is not [in] any efficacy at all," Rushakoff told Live Science. "The difference is it just starts working a little bit quicker and disappears a little bit quicker. So that means that you can take it just a few minutes before you eat, or if needed, right after you eat."

However, the few differences that exist can be a big problem for some people. For instance, many people with diabetes need a long-acting insulin in the background. The older NPH insulin might last anywhere from 14 to 24 hours, depending on the person, and it has a peak. When it peaks, it can cause a person to have low blood sugar, unless they just ate. In contrast, the newer, long-acting insulins, such as glargine, "are relatively flat — there's no peak," Rushakoff said. "Most of them last about 24 hours or more."

In addition, scientists obtain the older insulins from animal pancreases but produce the newer ones by inserting a human gene into bacteria, such as E. coli, which then pumps out insulin in a vat. People might respond differently to animal insulin than they do to the human variety, so they might have to adjust the number of units they take when switching from the new to the old insulins, said Dr. Loren Wissner Greene, an endocrinologist at New York University Langone Health.

Moreover, NPH contains protamine, a fish protein that allows the insulin to be gradually released and absorbed so that it lasts longer. However, some people have allergic reactions to protamine; that includes one man in China who died after getting an NPH injection. The newer insulins do not have this ingredient, Greene said.

In the case of Wilkerson, it's not clear if one of these rare issues was the cause of his problems or whether he was rationing insulin, Wyne said.

But either way, the older vials of insulin don't require a prescription and are less expensive than fast-acting insulins (they can be purchased at Walmart and other pharmacies for around $25 a vial). So, an increasing number of people who are underinsured or uninsured are going back to the old ways, Wyne said.

This can be a risky move for those who don't know how to use the older type of insulin, Wyne said.

If people are unsure how to convert from the newer brands and pens to the traditional vial and syringe, "you might not do it right," Wyne said. "How are you going to get a hold of your doctor and get the information on how to make the conversion?" Given how complicated it is, the doctor will likely ask patients to schedule a visit, but people without insurance often can't afford to do that, Wyne said.

So, Wyne and her colleagues are now trying to guess who might be losing their insurance, either because these patients are aging off their parents' insurance plans or because they're in a precarious situation. "Obviously, we don't know who is going to lose their insurance," she said. "But we need to be aware that they need the information in case that happens."

Until politicians or drug companies move to lower the costs of insulin in the U.S., patient education is an essential step, she said.

Wyne encouraged people with diabetes to alert their doctors if a change in insurance coverage is expected. Likewise, by educating patients about how to use vials and syringes, telling them how to take advantage of price-checking services such as GoodRx, and advising against the dangerous practice of rationing, doctors could save lives, Wyne said.