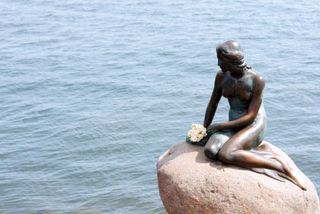 The Little Mermaid, a sculpture, sits on a rock in the harbor in Copenhagen, Denmark. She's about as close to real as any mermaid stories told through history, evidence suggests. The sculptor Edvard Eriksen created the statue, unveiled in 1913.
(Image: © stockxpert)

Locals and tourists in the Israeli town of Kiryat Yam have been flocking to the coast in hopes of glimpsing a creature that most people believe only exist in fairy tales.

An alleged mermaid, said to resemble a cross between a fish and a young girl, only appears at sunset. It performs a few tricks for onlookers before disappearing for the night.

One of the first people to see the mermaid, Shlomo Cohen, said, "I was with friends when suddenly we saw a woman laying on the sand in a weird way. At first I thought she was just another sunbather, but when we approached she jumped into the water and disappeared. We were all in shock because we saw she had a tail."

The town's tourism board is of course delighted with their newfound fame and local mystery fauna. Taking a cue from the town of Inverness, Scotland (on the shore of Loch Ness), the Kiryat Yam government has offered a $1 million reward for the first person to photograph the creature. Town spokesman Natti Zilberman thinks the reward money is well-spent. "I believe if there really is a mermaid then so many people will come to Kiryat Yam, a lot more money will be made than $1 million.”

Of course, if the mermaid does not exist -- perhaps it is a hoax, an optical illusion, or a simple misperception of a known animal -- then the town's reward money will remain safe and unclaimed, while the economy benefits from the influx of tourists vying to get a photo that will leave them set for life.

It's not clear what people are seeing, though the power of suggestion and imagination can be strong. Identifying animals in water is inherently problematic, since eyewitnesses by definition are only seeing a small part of the creature. When you add in the factor of low light at sunset and the distances involved, positively identifying even a known creature can be very difficult -- to say nothing of a mythological one!

Mermaids have long held fascination for seafaring peoples. There are a few dozen significant historical claims of actual mermaid sightings. Most of them are clearly myths and legends, such as "true" stories about lovely young women who married sailors but were later discovered to be shape-shifting mermaids (such as in the film "Splash").

Other reports date back centuries, and offer no proof or evidence other than a curious story. For example, a Capt. Richard Whitbourne claimed he saw a mermaid in Newfoundland's St. James harbor in 1610. Another story, from 1830 Scotland, claimed that a young boy killed a mermaid by throwing rocks at it; the creature looked like a child of about 3 or 4, but had a salmon's tail instead of legs. The villagers supposedly had it a funeral and buried it in a small coffin.

Hoaxers have worked to satisfy the public's appetite for mermaids; the fact that none have ever actually been found is only a minor inconvenience.

The great showman P.T. Barnum introduced a mermaid to astounded crowd in the 1840s: his infamous "FeeJee Mermaid", actually a taxidermy fake. The head and torso of a small monkey was grafted onto the body and tail of a fish. It was bizarre and strange - --certainly nothing anyone had seen before — but a far cry from the banners and posters suggesting a beautiful, half-naked woman.

Other mermaid fakes appeared throughout the centuries. Some were manatees that had been dressed up to resemble a human form and exhibited for profit.

Whether the Israeli mermaid sighting is genuine, a hoax, or an innocent mistake exploited for tourism, the reality of finding a real mermaid might be different than people imagine, as shown by a song from the Newfoundland band Great Big Sea, which sings folk-rock versions of traditional sea shanties. One of their most popular songs, titled "The Mermaid," tells of a lonely sailor who courts a mermaid:

"I love the girl with all me heart / But I only like the upper part / I do not like the tail!"

Benjamin Radford is managing editor of the Skeptical Inquirer science magazine. He wrote about mermaids in his book Lake Monster Mysteries: Investigating the World’s Most Elusive Creatures. His books, films, and other projects can be found on his website. His Bad Science column appears regularly on LiveScience.