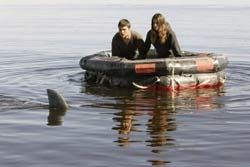 The Science of Sea Monsters

Sea monsters are in the news and on television like never before. NBC has a hit show on Monday nights with "Surface," about a huge, terrifying aquatic creature, and sea monsters grace the cover of the December 2005 issue of National Geographic.

Scientists working in Patagonia, South America, recently found remains of a 13-foot beast with four-inch teeth. The creature, dubbed "Godzilla" by its discoverers, is a distant relative of today's crocodiles and lived about 135 million years ago.

Since men took to sea, stories of fearsome leviathans have haunted those brave enough to venture beyond dry land. The Kraken, a huge many-tentacled beast, was said to attack sailors on the open ocean and drag them to their watery deaths.

As fantastic as these monsters are, science has discovered a biological basis for some of these myths.

Biologists have verified the existence of a true sea monster: the mysterious and elusive giant squid Architeuthis. Dead specimens periodically wash up on the world's beaches, most often in Newfoundland and New Zealand. The largest giant squid specimen, found in New Zealand, was estimated to be 65 feet long.

On Sept. 30, 2004, Japanese zoologists Tsunemi Kubodera and Kyoichi Mori became the first to see and film a giant squid at depth [images were released this year]. The creature, about 26 feet long, was found at a depth of 2,953 feet (900 meters). The researchers, searching whale feeding areas in the North Pacific near the Ogasawara Islands, used bait and a remote camera to film the creature.

Some suggest that huge, unidentified masses that occasionally wash up on beaches throughout the world are sea monsters. These finds, often called "globsters," are obviously flesh, yet have decayed so badly that they lack bones or distinguishing features.

One classic globster washed ashore in 1896, when giant waves tossed a massive fleshy corpse on a beach at St. Augustine, Florida. The rubbery, six-foot-high blob was examined by a local naturalist, who initially speculated that it was likely from a giant octopus far larger than any previously seen. Many other such blobs have washed ashore, including one in Chile in July 2003 and another in Newfoundland in 2001.

Controversy and mystery surrounded the creatures for decades, as definitive identifications eluded researchers.

A team of biologists led by Sidney Pierce began looking into the mystery.

As the team pointed out, "Wild claims, especially in the nonscientific literature, are regularly made that the blobs are the remains of sea monsters. For example, the Tasmanian West Coast Monster is still referred to as a monster, although an Australian scientific team…identified it as a whale. Other relics such as the St. Augustine (Florida) Sea Monster and the Bermuda Blob are still described by some as the remains of a gigantic octopus, even though A.E. Verrill—who named the St. Augustine specimen sight unseen—recanted his identification in favor of whale remains…and in spite of microscopic and biochemical analyses showing that they were nothing more than the collagenous matrix of whale blubber."

In 2004, Pierce and his colleagues examined all available globster specimens using electron microscopes, and applied biochemical, molecular, and DNA analysis.

The conclusion, published in Biological Bulletin: the samples matched exactly those of various species of great whales. The DNA and molecular structure were unmistakable, and "when the microscopic anatomy and biochemical composition of the Chilean and Nantucket Blobs are compared with those of the other remains, similarities are manifest. Thus, there is no doubt that they are all derived from the same type of organism."

With the application of science, one of the world's great mysteries of the sea was finally explained. The many mentions of globsters in books on the "unexplained" and marine mysteries will have to be revised in the cold light of hard evidence and close scrutiny.

So far, all the sea monsters science has found have either been extinct for millions of years or are known (but previously misidentified) creatures. Until hard evidence surfaces, truly unknown sea monsters will remain in the realm of fantasy and fiction.

Benjamin Radford is co-author of the forthcoming book "Lake Monster Mysteries" and wrote about Ogopogo, the Lake Okanagan monster, in the current issue of Skeptical Inquirer magazine.