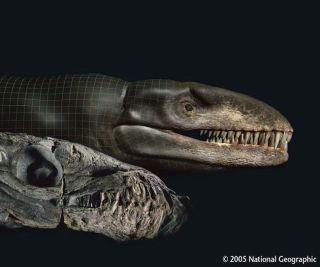 Finally, visual proof of the longstanding myth. Japanese scientists got the first images of a giant squid in its natural environment. In California, meanwhile, hundreds of huge squid washed ashore. And another new species of large squid was captured on video. Otherwise, it was a typical year for creatures of myth (some of which, like the squid, turn out to be real, by the way), with Bigfoot fans staging a conference and scientists exploring claims of a giant lake monster in Canada. Seems even scientists like a good tale; one team found an ancient sea creature that looks to be part crocodile, part T. rex and dubbed it Godzilla.

The 13-foot long beast, Dakosaurus andiniensis, had a massive 18-inch-long jaw with interlocking 4-inch teeth. It is a long-lost relative of the crocodile yet it had fins.

A digital rendering of the creature reveals the sort of thing typically reserved for horror movies.

The sheer strangness of the Dakosaurus andiniensis, found in South America and announced today, led its discoverers to call it Godzilla after the huge, amphibious, dinosaur-like movie icon.

"This species was very unusual, because other marine crocodiles that were around at the same time had very delicate features – long, skinny snouts and needle-like teeth for catching small fish and mollusks," said Ohio State University researcher Diego Pol, who determined the crocodile lineage. "But this croc was just the opposite. It had a short snout, and large teeth with serrated edges. It was definitely a predator of large sea creatures."

The fossils were found in Patagonia, in an area that was once a deep tropical bay attached to the Pacific Ocean, by paleontologists Zulma Gasparini and Luis Spalletti of the National University of La Plata in Argentina.

The finding is detailed in the Nov. 11 issue of the journal Science.

There were many types of crocodiles around 135 million years ago, when Dakosaurus andiniensis roamed the sea. None were as big, however. And none had such a short, stout snout or so few teeth.

"This is the most remarkable change in the size and shape of the teeth and snout in the history of marine crocs," Pol said.

Based on the size of its teeth, the beast dubbed Godzilla probably fed on other sea-going reptiles and big prey rather than fish, the researchers said.