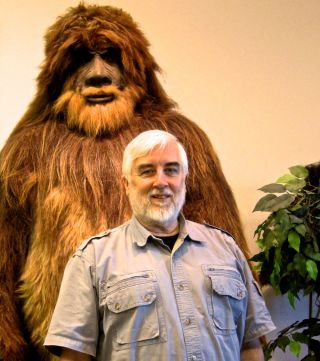 The International Cryptozoology Museum is the only museum of its kind in the world. Owner Loren Coleman opened the museum out of the first floor of his home about 10 years ago, but has since moved to a more central location in downtown Portland, Maine, where up to 10,000 visitors flock each year to examine evidence of Bigfoot and other cryptids – the general term for animals whose existences has yet to be substantiated.

This is an imagined depiction of a baby Bigfoot, created by an artist interested in exploring what the little one would look like. The museum contains roughly 10,000 items displayed in cases within two main rooms. Coleman has collected many of the items himself over the years, while other pieces have been donated by cryptozoologists around the world.

Cases of Full of Footprints

Several cases in the front room of the museum contain sets of Bigfoot prints casted from molds of prints discovered in the field. The casts vary in shape and size, and some appear more realistic than others.

This famous cast of what appears to be an injured Bigfoot foot was analyzed in detail by the late Grover Krantz, a professor of physical anthropology at Washington State University and a well-known Bigfoot investigator. Having considered the bone structure that would have supported the 10-foot-tall (3 meters) beast that made the footprint, Krantz posited that the central bones of the feet would have been vulnerable to crush wounds. The two protrusions on this print, he said, are likely remnants of such crush wounds that had healed over.

Orang Pendek is a bipedal hominid that physically resembles Bigfoot, but is thought to be much shorter, reaching only several feet tall. Orang Pendek sightings occur in Indonesia, home to the Sumatran orangutan which is thought to be distantly related to the cryptid. The museum sells casts of this and various other prints for visitors to take home and analyze on their own.

A purported piece of Orang Pendek hair, discovered in the forests of Indonesia.

Ray Wallace, a famous Bigfoot researcher and logger who lived in Toledo, Wash., reported Bigfoot sightings fairly regularly in the Pacific Northwest for roughly 30 years. In fact, his sightings were responsible for the original coinage of the term Bigfoot, which first appeared in a Humboldt Times article reporting on one of his sightings in 1958. However, when Wallace passed away in 2002 at the age of 84, his family revealed a collection of wooden molds that Wallace had used throughout the years to create false prints. The purported sightings had all been hoaxes. Experienced cryptozoologists say the wooden molds were not very sophisticated and the prints were never particularly convincing – the toes were too square to belong to an animal, and the wood lacks the texture of authentic animal prints.

The Honey Island Swamp Monster was thought to be a Bigfootlike bipedal hominid born from interbreeding alligators and chimpanzees in a swamp not far from New Orleans, La. Residents pointed to prints such as the one above to prove its existence. However, upon further examination, investigators determined that these purported cryptid prints were actually left by alligators living in the swamp.

Fiji mermaids are a cross between an ape and a fish, and are known to be fictional.

A taxidermied Fur Bearing Trout, which is known to be fictional.

A taxidermied Jackalope, which is a fictional cross between a rabbit and an antelope. Some believe that rabbits harboring the papilloma virus may have inspired this mythical beast, since animals with the virus grow tumors on their heads that resemble small horns.