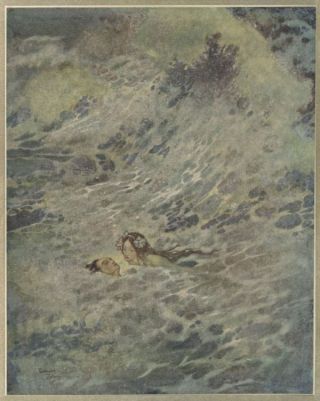 Kids of any age love to read fairy tales because the storyline never limits the possibility that anything could happen. Curses, spells, and handsome princes reign in worlds beyond the reader’s imagination.

But are the most magical moments from some of our favorite stories actually possible? Basic physical principles and recent scientific research suggest that what readers might mistake for fantasies and exaggeration could be rooted in reality.

So suspend your imagination for a moment, and look at the following fairy tales as a hard-core scientist might.

In the Brothers Grimm story of Rapunzel, a witch holds a beautiful young woman captive in a tower. Rapunzel is blessed with a lovely singing voice and long, long blond hair. One day, her voice enchants a prince passing through a nearby forest. They fall in love, and Rapunzel lets down her hair so that the prince may use it to climb the tower to meet her. This chain of events begs readers to ask a question. Can human hair support the weight of another person?

On average one strand of hair can support about three and one-half ounces, or about the weight of two candy bars. Each strand of dark hair is generally thicker, and therefore stronger, than blond hair.

But, alas, Rapunzel must make do with blond locks. Given that blondes generally have about 140,000 hairs on their heads, her hair should easily support the weight of many, many princes. However, there is more to this story.

If Rapunzel simply let down her hair and the prince started climbing immediately, her hair would not break, but it might rip out. Also, the rest of her body might not be able to support the weight. Thankfully, there are strategies that she can use to help reduce the strain on her head and body.

Nathan Harshman, Assistant Professor of Physics at American University in Washington, DC, suggests Rapunzel would be safer and more secure if she tied her hair around something before lowering it. “The whole idea is that you can use the friction of the hair against itself in the knot, and whatever it is tied around will support the weight of the prince.” That is a much better idea than making Rapunzel’s scalp the anchor point.

In the Disney version of Hans Christian Andersen’s The Little Mermaid, Ariel (the mermaid) asks a witch to make her human because she has fallen in love with a human prince. The witch bargains with Ariel and takes her voice in exchange for performing the transformation. For a considerable part of the story Ariel cannot speak, which is a problem because the prince can only recognize her by her incredibly beautiful singing voice. Later, she recovers her voice and wins the love of the prince (sorry to spoil the ending).

In the story, Ariel loses her voice because of a curse. However, a less skilled sorceress could use a different method to silence a singing mermaid. Scientists have figured out a way to bend sound waves around an object and, can even prevent the escape of all sounds created inside a given area (important for keeping a transformed, singing mermaid from being heard).

Recently, Steve Cummer, Associate Professor of Electrical and Computer Engineering at Duke University announced that it is theoretically possible to create such a sound shield. Building on research demonstrating how light waves can be bent around an object to make it appear invisible, Cummer and his collaborators used mathematical analysis to show how to do the same thing with sound. They established that it is possible to create a material that bends sound waves around walls, pillars, or any enclosed area, where the sound waves emerge as if nothing had been in their way. It would be like someone in the bedroom being able to hear what someone in the living room said, but as if there were no wall between them.

A side effect of this discovery is that sound waves generated inside the enclosed area would never escape. If the witch had been extremely clever, she could have built this material, and there would have been no need for a curse. Or maybe she did, and a transparent sound shield based on these principles was what enveloped Ariel until her love for the Prince melted it away, finally releasing her melodious voice for the Prince to hear.

One of the most exciting objects found in fairy tales is the flying carpet. In tales from a wide variety of cultures, including 1,001 Arabian Nights, these tangled tapestries take flight to carry people vast distances. Flying carpets are clearly impossible, right?

Three scientists recently published a paper in the journal Physical Review Letters showing that there are conditions under which a carpet could fly. They used the basic laws of physics to show that a small, thin carpet could fly if the air were vibrating at the right frequency, much like how a piece of tissue paper floats softly to the ground when it is dropped. Their calculations showed that small waves of air in repeated fast pulses could steer a carpet at a speed of around one foot per second.

Don’t expect to see Aladdin flying by anytime soon, but the scientists write that all of their conditions “are within the realm of possibilities in nature and in technology. Making a heavy carpet fly would, of course, require a much more powerful engine, and our [calculations] suggest it will remain in the magical, mystical, and virtual realm as it has existed for millennia.”

Perhaps some fairy tales are more grounded in reality than others. Or maybe these precious stories are exactly what we thought they were. An idea is fertilized by the imagination and expanded beyond what seems possible. Or maybe science has come so far over the years that scientists are looking beyond the problems of the physical world and into the imaginations of children for their inspiration.

What could be next? Perhaps a scientific debate over the temperature at which porridge is considered “just right.”

This article was provided by Inside Science News Service, which is supported by the American Institute of Physics.