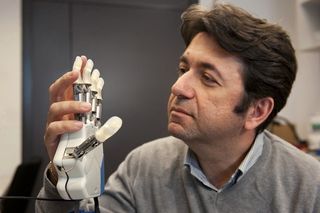 Silvestro Micera, a neural engineer, led a team that developed a bionic hand that can feel.
(Image: © EPFL / Hillary Sanctuary)

Biomedical engineering, or bioengineering, is the application of engineering principles to the fields of biology and health care. Bioengineers work with doctors, therapists and researchers to develop systems, equipment and devices in order to solve clinical problems.

Biomedical engineers have developed a number of life-enhancing and life-saving technologies. These include:

The practice of biomedical engineering has a long history. One of the earliest examples is a wood and leather prosthetic toe found on a 3,000-year-old Egyptian mummy. Before that, even simple crutches and walking sticks were a form of engineered assistive devices, and the first person to fashion a splint for a broken bone could be considered to have been an early biomedical engineer.

Biomedical engineering has evolved over the years in response to advancements in science and technology. Throughout history, humans have made increasingly more effective devices to diagnose and treat diseases and to alleviate, rehabilitate or compensate for disabilities or injuries. One example is the evolution of hearing aids to mitigate hearing loss through sound amplification. The ear trumpet, a large horn-shaped device that was held up to the ear, was the only "viable form" of hearing assistance until the mid-20th century, according to the Hearing Aid Museum. Electrical devices had been developed before then, but were slow to catch on, the museum said on its website.

The works of Alexander Graham Bell and Thomas Edison on sound transmission and amplification in the late 19th and early 20th centuries were applied to make the first tabletop hearing aids. These were followed by the first portable (or "luggable") devices using vacuum-tube amplifiers powered by large batteries. However, the first wearable hearing aids had to await the development of the transistor by William Shockley and his team at Bell Laboratories. Subsequent development of micro-integrated circuits and advance battery technology has led to miniature hearing aids that fit entirely within the ear canal.

Some notable figures in the history of biomedical engineering and their contributions include:

Biomedical engineers design and develop medical systems, equipment and devices. According to the U.S. Bureau of Labor Statistics (BLS), this requires in-depth knowledge of the operational principles of the equipment (electronic, mechanical, biological, etc.) as well as knowledge about the application for which it is to be used. For instance, in order to design an artificial heart, an engineer must have extensive knowledge of electrical engineering, mechanical engineering and fluid dynamics as well as an in-depth understanding of cardiology and physiology. Designing a lab-on-a-chip requires knowledge of electronics, nanotechnology, materials science and biochemistry. In order to design prosthetic replacement limbs, expertise in mechanical engineering and material properties as well as biomechanics and physiology is essential.

The critical skills needed by a biomedical engineer include a well-rounded understanding of several areas of engineering as well as the specific area of application. This could include studying physiology, organic chemistry, biomechanics or computer science. Continuing education and training are also necessary to keep up with technological advances and potential new applications.

Most biomedical engineering jobs require at least a bachelor's degree in biomedical engineering, according to the BLS. Many employers also require state certification as a professional engineer. A master's degree is often required for promotion to management, and ongoing education and training are needed to keep up with advances in technology, testing and monitoring equipment, computer hardware and software, and government regulations.

What is the future of biomedical engineering?

The BLS projects that employment of biomedical engineers will grow 27 percent from 2012 to 2022, much faster than the average for all occupations. Demand will be strong because an aging population is likely to need more medical care and because of increased public awareness of biomedical engineering advances and their benefits, according to the BLS.

Jim Lucas is a freelance writer and editor specializing in physics, astronomy and engineering. He is general manager of Lucas Technologies.