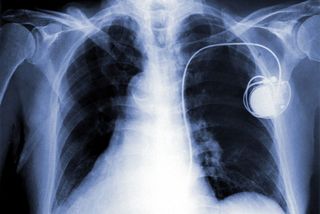 Electronic pacemakers can be lifesaving for people with abnormal or slow heart rhythms, but not everyone who needs a pacemaker is able to have an electronic device implanted in their heart.

Now, in experiments in pigs, researchers have come up with a new method for making a "biological pacemaker" that might one day serve as an alternative to electronic ones, the researchers said.

Making this pacemaker involves injecting a gene into heart muscle cells, which transforms these normal heart cells into special cells that can initiate a heartbeat. [Heart of the Matter: 7 Things to Know About Your Ticker]

This method could be useful for certain patients, such as those who develop infections from electronic pacemakers and need to have the devices temporarily removed, or fetuses with life-threatening heart disorders who cannot have an electronic pacemaker implanted, the researchers said.

"Babies still in the womb cannot have a pacemaker," study researcher Dr. Eugenio Cingolani, director of the Cardiogenetics-Familial Arrhythmia Clinic at Cedars-Sinai Heart Institute in Los Angeles, said in a statement. "It is possible that one day, we might be able to save lives by replacing [electronic] hardware with an injection of genes."

The researchers previously showed that this method worked in rodents, but pig hearts are similar to human hearts in their size and the way that they work, so there's reason to think the new findings could translate to humans. Still, more research is needed before the method could be tested in people to better understand the treatment's safety and effectiveness, the researchers said. The method relies on a virus to insert the gene into the heart cells, and although this virus cannot replicate itself or integrate into the genome, the pig experiments showed that a small amount of virus did end up in other organs in the animals besides the heart, according to the study published today (July 16) in the journal Science Translational Medicine.

In healthy people, a small region of the heart, called the sinoatrial node, fires the electrical impulses that determine heart rate. If this region is not working properly, people can develop heart rhythm problems, and have symptoms such as fatigue, fainting or even cardiac arrest. Such patients may have electronic pacemakers put in to monitor the heart rhythm, which sends electrical pulses to keep the heart beating normally.

In the study, the researchers used pigs with a condition called complete heart block, in which the heart beats very slowly. The researchers injected a gene called TBX18 into a small area of the heart muscle. This gene converted this area of heart muscle cells into sinoatrial node cells.

"In essence, we create a new sinoatrial node in a part of the heart that ordinarily spreads the impulse, but does not originate it," study researcher Dr. Eduardo Marbán, director of the Cedars-Sinai Heart Institute, said in news conference about the findings. "The newly created node then takes over as a functional pacemaker, bypassing the need for implanted electronics and hardware."

Within a few days, the pigs that received the TBX18 gene had faster heartbeats than pigs that did not receive the gene. In addition, the hearts of pigs with the biological pacemaker were able to speed up during exercise, and slow down during rest much better than the hearts of pigs without the biological pacemaker. The pigs with the TBX18 gene were also more physically active than the pigs without the gene, according to the study.

The new findings "represent a critical step toward potentially filling an important clinical niche and provide an encouraging indication that a biological pacemaker might eventually be ready for human translation," Dr. Nikhil Munshi and Eric Olson, of the University of Texas Southwestern Medical Center, wrote in an editorial accompanying the study in the journal.

However, some questions still need to be addressed. In the study, a small amount of virus ended up in the pigs' spleens and lungs after it was injected, and so future research is needed to see whether this low level of infection has long-term consequences, the editorial said.

In addition, it could be problematic if the virus ends up in multiple places in the heart and forms more than one biological pacemaker. "If multiple pacemaker foci were to form, there would be the potential for 'competition' between the foci, and the concern would be that competing pacemakers would be less efficient in setting a consistent heart rate," Munshi told Live Science.