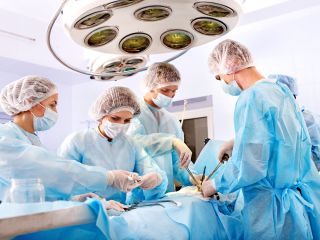 One of the trickiest parts of surgery is also the most commonplace: sutures to close incisions.

Infections and scarring at the site of sutures are frequent concerns of surgeons as well as patients. One recent advancement, laser tissue welding (LTW), holds the promise of reducing suturing problems while also shortening operation times.

LTW uses laser light to heat tissue; the heating causes the edges of incisions to seal tightly and quickly with less scarring, The Engineer reports.

But LTW has one drawback: The seals it forms aren't very strong, Gizmag reports. This is a real concern in surgeries involving organs like the intestines, where any leakage could result in an extremely painful, life-threatening infection.

Researchers are therefore excited about a new gold-based "solder" material that can be used in LTW.

The material, a plasmonic nanocomposite, has gold nanorods in it that are so tiny 100,000 could fit in the period at the end of this sentence, according to a news release.

When testing the material on pig intestines, surgeons discovered that the material is very strong and forms a liquid-tight seal. It's also elastic enough to move with the body, reducing the risk of rupture and infection.

"Taken together, these plasmonic nanocomposites are exciting materials for laser-based tissue repair," the researchers said in a statement.