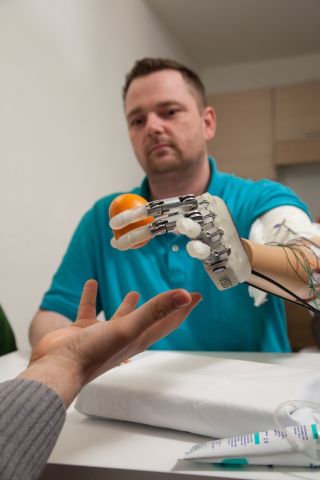 Nine years ago, Dennis Aabo Sørensen severely wounded his left arm in a fireworks accident, and had to have it amputated. Now, a bionic hand has restored his ability to feel, the first time this has been reported in a scientific journal.

Researchers embedded electrodes in Sørensen's arm, and touch sensors in a prosthetic hand to stimulate his remaining nerves. With the hand, Sørensen was able to recognize different objects by their feel, and grasp them appropriately, according to the study detailed online today (Feb. 5) in the journal Science Translational Medicine.

"I could feel things that I hadn't been able to feel in over nine years," Sørensen, who lives in Denmark, said in a statement.

So far, Sørensen is the only person to test the prosthesis, and he's had it for only a short time, but if proven to work over the long term in more people, the system could vastly improve the function of current prosthetic limbs and the quality of life for their users. [See Video of Prosthetic Hand Than Can Feel]

The ability to feel is critical for the dexterity humans need to perform basic tasks with their hands. Tactile information tells a person how much force to use when grasping objects as rigid as a coffee mug or as delicate as a grape.

"Without sensory feedback from our hands, we would have difficulties performing even the most basic activities of daily living," said Sliman Bensmaia, a neuroscientist at the University of Chicago, who was not involved in the research.

Many researchers are developing prosthetic systems aimed at restoring people's ability to control their arms or legs after amputation, spinal cord injury or disease. And increasingly, scientists are also working on incorporating touch-sensitive feedback. This is first scientific paper to report such feedback successfully in a human patient.

Silvestro Micera, a neural engineer at the Scuola Superiore Sant'Anna in Italy and the Swiss Federal Institute of Technology Lausanne in Switzerland, led the team that developed the feeling bionic hand. Micera and his team connected touch sensors in the artificial hand to electrodes surgically embedded in the remains of nerves in Sørensen's upper arm. Computer algorithms converted the signals from the sensors into a form the nerves could detect.

In a month-long clinical trial, Sørensen tested the hand, sometimes wearing a blindfold and earplugs so he could rely only on his sense of touch when using the hand. Sørensen was able to control how forcefully he grasped objects, and feel their shape and stiffness. He could tell the differences among hard, medium and soft objects, and identify the shapes of specific objects such as a cylindrical bottle or round baseball. [Images: Bionic Hand That Can Feel]

Sørensen told researchers that the artificial sense of touch was similar to the natural feeling he experienced in his other hand.

In contrast with previous approaches to replace a lost sense of touch by, for example, vibrating the skin, the new approach provides "anatomically appropriate feedback," researchers said.

"By directly stimulating the nerves, it's possible that you can appropriately restore that sensory feedback," said Levi Hargrove, an electrical engineer at the Rehabilitation Institute of Chicago, who was not involved in the research.

Both Hargrove and Bensmaia noted that the study is preliminary, because it involved only a single person. Furthermore, in order to be a safe and useful device, the system would need to be fully implantable under the skin, and would need to keep working over a long time, they said.

Although it will probably be years before a system like the one Micera and colleagues developed is ready for clinical use, it is "certainly a major step in the right direction," Hargrove told Live Science.

Editor's Note: This article was updated at 3:20 p.m. ET Feb. 6, 2014 to clarify that this was the first study in a scientific journal  to report that touch has been restored to a human patient via a prosthetic hand.