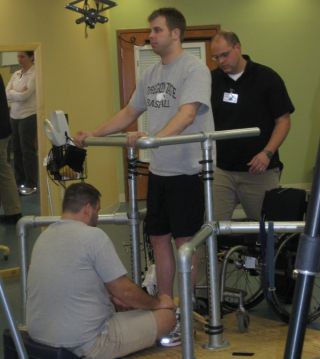 An experimental spinal cord therapy allowed Rob Summers, 25, a paraplegic, to stand on his own for the first time in four years.
(Image: © Rob Summers)

A man rendered paralyzed from the chest down after a car accident in 2006 is now able to stand and take steps with assistance thanks to an experimental therapy to treat spinal cord injuries, researchers announced Thursday (May 19).

Prior to treatment, Rob Summers, now 25, was not able to move his trunk or lower extremities.

While much more work is needed, the researchers hope the therapy will eventually allow others with certain types of spinal cord injuries to regain the ability to stand, balance, and step again.

The study "opens up a huge opportunity to improve the daily functioning of these individuals ... but we have a long road ahead," study researcher Susan Harkema, of the University of Louisville, said in a statement.

The therapy involves applying an electric current to specific parts of the lower spinal cord. The stimulation doesn't induce movement, but taps into a network of spinal cord nerves that are capable of initiating movement on their own, without the help of the brain. This is the first time researchers have been able to utilize this network to allow a paralyzed individual to stand or take steps, the researchers say.

However, the researchers caution the study represents just one case, and there's no telling if others would respond in the same way to the treatment. In addition, Summers did retain some feeling in his lower body after the accident. Individuals with more severe spinal injury, who lose both movement and feeling, may not benefit from the therapy in the same way, the researchers say.

The study is published today in the journal The Lancet.

After being hit by a motor vehicle, Summers received two years of rehabilitation therapy, but did not gain back any voluntary movement in his legs and could not stand up or walk.

In 2009, Summers had surgery to implant a device that would electrically stimulate his lower spinal cord. The electric current is intended to mimic signals that normally come from the brain. At the same time the signal is given, the patient attempts to perform a specific task, such as bearing weight on his legs.

When the stimulation is applied, nerves from the spinal cord work together with cues from the legs to direct muscle movement, the researchers say. This happens without input from the brain.

Today, Summers is able to stand up for four minutes without assistance, and for an hour with necessary assistance when he weakens. With the aid of therapists and a harness, he can take steps on a treadmill.

"This procedure has completely changed my life," Summers said in a statement. "For someone who for four years was unable to even move a toe, to have the freedom and ability to stand on my own is the most amazing feeling," he said. "My physique and muscle tone has improved greatly, so much that most people don’t even believe I am paralyzed."

He is able to flex his toes, knees and ankles on command. The ability to flex his muscles in this voluntary manner requires input from the brain. So, somehow the brain has regained access to the spinal cord circuitry below the site of injury. The researchers aren't sure how this happened, but they think the electrical stimulation may have reactivated nerve circuits that were spared injury, or prompted injured nerves to create new connections.

While Summers and others who might receive the treatment may never be able to walk unassisted again, the therapy could significantly benefit their health and quality of life, Harkema said.

"Allowing people to stand a few minutes a day can dramatically change their health," she said.

Future studies are needed to replicate the findings since it's possible the results may be a placebo effect, said Ephron Rosenzweig, a researcher at the University of California, San Diego who studies spinal cord injuries and was not involved in the current study.

But the results suggest that even in cases in which the patient has complete loss of movement, there may still be viable nerve circuitry, Rosenzweig said.

There are other examples of paraplegic individuals with severe spinal cord injuries who have been able to walk again with the help of technology. Last week, a paralyzed UC Berkeley student was able to walk across the stage at graduation with the help of a robotic "exoskeleton." This device, made up of a pair of leg braces equipped with sensors, is controlled by a computer that tells each muscle when to move. In this case, the computer is doing all the work, Rosenzweig said.

In Summers' case, the electrical stimulation appears to be allowing the body's own circuitry to generate the signals for movement, Rosenzweig said.

The researchers plan to test the therapy on four other patients and conduct further studies to figure out which patients the treatment would most benefit.

Pass it on: An experimental treatment allowed a paralyzed man to regain the ability to stand and take steps. More work is needed to see if other individuals respond as well to the therapy.