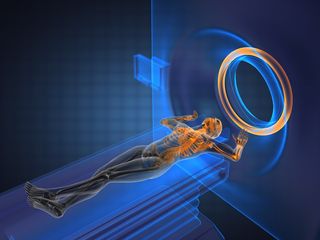 The scan uses a strong magnetic field and radio waves to generate images of parts of the body that can't be seen as well with X-rays, CT scans or ultrasound. For example, it can help doctors to see inside joints, cartilage, ligaments, muscles and tendons, which makes it helpful for detecting various sports injuries.

MRI is also used to examine internal body structures and diagnose a variety of disorders, such as strokes, tumors, aneurysms, spinal cord injuries, multiple sclerosis and eye or inner ear problems, according to the Mayo Clinic. It is also widely used in research to measure brain structure and function, among other things.

"What makes MRI so powerful is, you have really exquisite soft tissue, and anatomic, detail," said Dr. Christopher Filippi, a diagnostic radiologist at North Shore University Hospital, Manhasset, New York. The biggest benefit of MRI compared with other imaging techniques (such as CT scans and x-rays) is, there's no risk of being exposed to radiation, Filippi told Live Science.

During an MRI, a person will be asked to lie on a movable table that will slide into a doughnut-shaped opening of the machine to scan a specific portion of your body. The machine itself will generate a strong magnetic field around the person and radio waves will be directed at the body, according to the Mayo Clinic.

A person will not feel the magnetic field or radio waves, so the procedure itself is painless. However, there may be a lot of loud thumping or tapping noises during the scan (it may sound like a sledgehammer!), so people are often given headphones to listen to music or earplugs to help block the sound. A technician may also give instructions to you during the test.

Some people may be given a contrast solution by intravenous, a liquid dye that can highlight specific problems that might not show up otherwise on the scan.

Young children as well as people who feel claustrophobic in enclosed places may be given sedating medication to help them relax or fall asleep during the scan because it is important to stay as still as possible to get clear images. Movement can blur the images.

Some hospitals might have an open MRI machine that is open on the sides rather than the tunnel-like tube found in a traditional machine. This may be a helpful alternative for people who feel afraid of confined spaces.

The scan itself may take 30 to 60 minutes, on average, according to the American Academy of Family Physicians.

A radiologist will look at the images and send a report to your doctor with your test results.

The human body is mostly water. Water molecules (H2O) contain hydrogen nuclei (protons), which become aligned in a magnetic field. An MRI scanner applies a very strong magnetic field (about 0.2 to 3 teslas, or roughly a thousand times the strength of a typical fridge magnet), which aligns the proton "spins."

The scanner also produces a radio frequency current that creates a varying magnetic field. The protons absorb the energy from the magnetic field and flip their spins. When the field is turned off, the protons gradually return to their normal spin, a process called precession. The return process produces a radio signal that can be measured by receivers in the scanner and made into an image, Filippi explained.

This form of MRI measures how water molecules diffuse through body tissues. Certain disease processes — such as a stroke or tumor — can restrict this diffusion, so this method is often used to diagnose them, Filippi said. Diffusion MRI has only been around for about 15 to 20 years, he added.

In addition to structural imaging, MRI can also be used to visualize functional activity in the brain. Functional MRI, or fMRI, measures changes in blood flow to different parts of the brain.

It is used to observe brain structures and to determine which parts of the brain are handling critical functions. Functional MRI may also be used to evaluate damage from a head injury or Alzheimer's disease. fMRI has been especially useful in neuroscience — "It has really revolutionized how we study the brain," Filippi told Live Science.

Unlike other imaging forms like X-rays or CT scans, MRI doesn't use ionizing radiation. MRI is increasingly being used to image fetuses during pregnancy, and no adverse effects on the fetus have been demonstrated, Filippi said.

Still, the procedure can have risks, and medical societies don't recommend using MRI as the first stage of diagnosis.

Because MRI uses strong magnets, any kind of metal implant, such as a pacemaker, artificial joints, artificial heart valves, cochlear implants or metal plates, screws or rods, pose a hazard. The implant can move or heat up in the magnetic field.

Several patients with pacemakers who underwent MRI scans have died, patients should always be asked about any implants before getting scanned. Many implants today are "MR-safe," however, Filippi said.

The constant flipping of magnetic fields can produce loud clicking or beeping noises, so ear protection is necessary during the scan.

Cari Nierenberg contributed to this article.