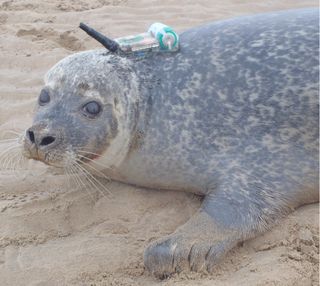 As the number of offshore wind farms continues to grow, the farms may affect both seals and their prey, the finding suggests. However, it remains uncertain whether the effects will be helpful or harmful, scientists added.

Wind farms are banks of wind turbines that harness the wind's energy to produce electricity. Those located offshore can take advantage of mighty coastal winds to generate substantial amounts of power in a renewable manner. For instance, Denmark currently gets about 30 percent of its electricity from wind power.

To learn more about the potential environmental impacts of these wind turbines, scientists tagged harbor seals and gray seals on the British and Dutch coasts in the North Sea. Each tag was glued onto the fur on the back of a seal's neck, and carried a GPS tracking device to monitor that seal's every movement.

The scientists found these three seals were part of a group of 11 seals that swam within two active offshore wind farms — Alpha Ventus off the coast of Germany, and Sheringham Shoal off the east coast of England. The grid patterns of the seals' movements showed how the animals swam in straight lines between wind turbines.

"We could actually pinpoint where the wind turbines were by looking at the paths the seals traveled," Russell told Live Science.

The scientists also saw both gray and harbor seals visiting offshore oil and gas pipelines. Researchers observed two harbor seals in the Netherlands following sections of pipeline on multiple trips lasting up to 10 days each.

The researchers suggest these man-made structures may act like artificial reefs that shelter potential prey, making the areas attractive hunting grounds for the seals. "This is the first time marine mammals have shown use of these artificial structures for foraging," Russell said.

It remains uncertain what the environmental consequences of offshore wind farms will be for seals and their prey. If these farms increase the total amount of prey available for seals, "then the effects may be positive overall," Russell said. "However, if they are simply concentrating existing prey and making them vulnerable to predation to animals such as seals, that could deplete the populations of those prey."

In the future, the scientists would like to tag more seals to find out what percentage of the animals forage at offshore wind farms and pipelines, to show how much these artificial structures affect the seals' environment.

The scientists detailed their findings online July 21 in the journal Current Biology.