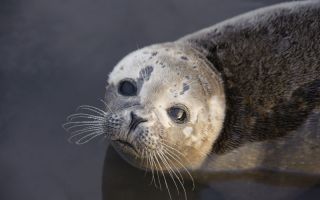 Seals and sea lions are semiaquatic mammals that are in a group called pinnipeds, meaning "fin-footed." Walruses are also members of this group. While related, all three are in different taxonomic families.

As their names imply, one difference between the two types of seals is their ears. Eared seals have external ear flaps, while true seals do not. Another difference is that the rear flippers of true seals point backward, and these seals move on land with an up-and-down undulating motion. Fur seals and sea lions can rotate their hind feet and use them to walk along with some speed. Also, fur seals are so-named because they have thick fur that can trap air and help keep them warm. True seals have thin fur and use blubber for insulation.

The smallest is the ringed seal, with an average length of 5 feet (1.5 m) and a weight of 110 to 150 lbs. (50 to 70 kg). Unlike other seals, males and females are about the same size. The ringed seal is the most common seal in the Arctic, according to the National Oceanic and Atmospheric Administration (NOAA).

There are 16 species of eared seals; seven of them are sea lion species. One of the most recognized species, according to the NOAA, is the California sea lion, which is often featured doing tricks at zoos and aquariums. In the wild, these animals live along the West Coast of North America. They are often seen sunning themselves on beaches, docks and jetties. Males average about 700 lbs. (315 kg) and can reach above 1,000 lbs. (455 kg). Females average 240 lbs. (110 kg).  [Gallery: Seals of the World]

True seals typically live in the cold ocean waters of the Arctic or off the coasts of Antarctica. Some seals make caves in the snow to live in. Others never leave the ice pack and poke breathing holes in the ice, according to the National Snow and Ice Data Center. Harp, ringed, hooded, spotted, bearded and ribbon seals live in the Arctic. Crabeater, Weddell, leopard and Ross seals live in the Antarctic.

Fur seals and sea lions live in the Northern Pacific between Asia and North America and off the coasts of South America, Antarctica, southwestern Africa and southern Australia. They can spend about two years in the open ocean before returning to their breeding grounds, according to the NOAA.

Seals generally prey on fish, but they will also eat eel, squid, octopus and lobster. Leopard seals will eat penguins and smaller seals, according to Seals World. The gray seal can eat 10 pounds (4.53 kilograms) of food in one day. They sometimes skip eating for a few days, and often stop eating completely during mating season and will live off energy from their stored-up blubber for weeks.

When mating season comes, male seals will issue deep, throaty calls to attract the attention of females. A male seal will also call out to let other males know that his females are spoken for. Males are very territorial when it comes to mating. They will fight for the right to mate, hitting and biting each other. The winner gets the chance to mate with up to 50 females in their area.

Mothers carry their young for a gestation period of around 10 months. When they feel the time is right, some seals will dig nests in the sand on which to have their young. Seals and sea lions have just one pup a year. Others, like the harp seal, will have their babies directly on icebergs. Baby seals, called pups, will stay on land until their waterproof fur grows in. This can take around a month.

Females will mate and become pregnant again as soon as her pups are weaned. Males are not able to mate until they are around 8 years old, because it takes that long for them to grow big enough and strong enough to win a mating fight.

All pinnipeds — phocids (true seals), otariids (eared seals) and odobenids (walruses) — are in different families in the suborder Caniformia (doglike carnivores) and are related to dogs, coyotes, foxes, wolves, skunks, otters and bears.

The taxonomy of seals, according to ITIS, is:

All pinnipeds — seals, sea lions and walruses — are protected in U.S. waters under the Marine Mammal Protection Act, according to NOAA. Most seals are not considered endangered, according to the Red List of the International Union for Conservation of Nature (IUCN). There are a few exceptions, though. The Galápagos fur seal and the monk seal are both endangered. Some local populations, such as gray seals in the Baltic Sea, are endangered. The northern fur seal and hooded seal are vulnerable. The Caribbean monk seal was declared extinct in 2008.

The crabeater seal has the largest population of any species of seal in the world. It is estimated there are 2 million to 75 million individual seals, according to the IUCN.

Elephant seals have what is called "smoker's blood" because they have the same amount of carbon monoxide in their blood as a person who smokes 40 or more cigarettes each day, according to researchers. Scientists think this high level of gas in their blood may protect them when they dive to deep levels in the ocean.