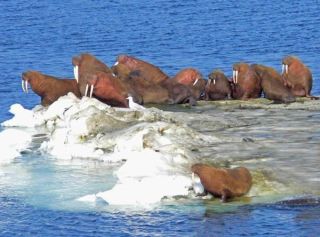 Walruses on ice afloat in the Bering Sea. Millions of years ago, there was no ice to be found in the region.
(Image: © Liz Labunski/USFWS.)

Walruses are the gentle giants of the Arctic. They are among the largest pinnipeds — fin-footed, semiaquatic marine mammals. However, while they have an intimidating size, and are carnivores, these animals are not aggressive.

Walruses have large, flabby bodies covered in brown or pink skin. Short fur covers most of their bodies except for their fins. Their faces feature two small eyes, a mustache and two long tusks.

Walruses weigh from 600 to 1,500 kilograms (1,320 to 3,300 lbs.) and can be as long as 3.2 meters (10.5 feet), according to the Animal Diversity Web (ADW), a database maintained by the Museum of Zoology at the University of Michigan. Males are about twice as big as females,  have longer and thicker tusks, and usually have thicker skin.

Walrus tusks can grow up to 3 feet (1 m). The tusks are canine teeth and stick out from either side of the animal's mouth. Walruses use their tusks to break through ice, and to assist in climbing out of the water and onto the ice. The animals also use their tusks to defend themselves from larger predators and to establish dominance and a hierarchy among walruses, according to the ADW.[Giants on Ice: Gallery of Walruses]

Most walruses live in frigid waters near the Arctic Circle. They prefer areas with shallow water so they can easily access food, according to the ADW.

Walruses climb up on ice or beaches to sleep or to rest. They don't move quickly on land but are swift in the water. Walruses can swim on average around 4.35 mph (7 km/h) and as fast as 21.74 mph (35 km/h), according to the MarineBio Conservation Society.

Walruses are very fat, but for good reason. Their blubber keeps them warm in frigid waters. These animals can also slow their heart rates, which allows them to live in freezing temperatures, according to National Geographic.

Walruses are carnivores, but they aren't ferocious hunters. The walrus' favorite food is shellfish. They dive underwater and use their whiskers to detect the shellfish in the dark waters of the ocean. According to the Smithsonian Institution's Arctic Study Center, a walrus can eat up to 4,000 clams in one feeding. When food is hard to come by, walruses will also eat the carcasses of dead seals.

As soon as the calf is born, it can swim. It will swim along with its mother for the first three years of its life. Then, at 3 years old, the male calves will go off to live with the male herd. At 15, the male will start to mate. Females will mate as soon they reach 5 years old. Walruses can live up to 40 years.

The Integrated Taxonomic Information System (ITIS) places the walrus in a suborder that is made up of doglike carnivores, which includes seals, coyotes, foxes, jackals, wolves, skunks and bears. The taxonomy of walruses is:

In the 1950s, the population of walruses was almost eliminated due to commercial hunting, but the population was brought back to a thriving number in the 1980s. The IUCN does not have a category or criteria on the conservation status of the walrus. This is because the animal's population is currently unknown. The organization does say that the population is large, but declining, due to climate change.

Native people of the Arctic hunt walruses for hides, food, ivory and bones, according to the IUCN.  These natives are now the only people who are allowed to legally hunt walruses.

Odobenus rosmarus, the walruses' scientific name, is Latin for "tooth-walking sea-horse," according to National Geographic.

Walruses have only two natural predators: the orca (or killer whale) and the polar bear. Both are more likely to hunt walrus calves than adults.

"The Walrus and the Carpenter" is a poem written in 1865 by Lewis Carroll. National Geographic has put together a "GeoStory" with images, maps and information about the poem.