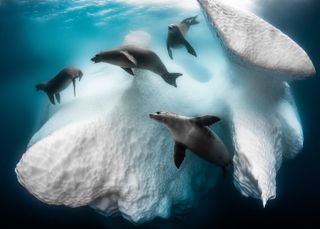 In "Frozen Mobile Home," crabeater seals cavort under an iceberg, near Antarctica. This mesmerizing image earned Greg Lecoeur the title of Underwater Photographer of the Year 2020.
(Image: © Copyright Greg Lecoeur/UPY2020)

An iceberg towering above the sea surface is an impressive sight, but the view from below is positively otherworldly.

A breathtaking photo captured by French photographer Greg Lecoeur in chilly ocean waters near Antarctica revealed a mesmerizing scene: a drifting quartet of crabeater seals (Lobodon carcinophagus) illuminated by blue-tinged light under the bottom of a shadow-dappled iceberg.

Judges named Lecoeur the Underwater Photographer of the Year (UPY) 2020 for his mesmerizing wide-angle image, titled "Frozen Mobile Home." Lecoeur's photo stood out among more than 5,500 submissions representing photographers from over 70 countries, contest representatives announced on the UPY website.

As a full-time photographer, Lecoeur travels to remote destinations around the world to document marine animals, and in Antarctica he was drawn to the wildlife that collect around "massive and mysterious" iceberg habitats, he said in a statement.

"Little is known about how wildlife thrives around these mobile homes," Lecoeur said. "Icebergs fertilize the oceans by carrying nutrients from land that spark blooms of marine life and also provide homes for larger animals, like these crabeater seals."

The seals dine on krill — shrimplike crustaceans that are abundant in waters around Antarctica — and krill are nourished by the nutrients that flow into the ocean from melting icebergs and glaciers, according to the Woods Hole Oceanographic Institution's Oceanus Magazine.

Lecoeur captured the photo during an expedition to the Antarctic Peninsula, where the team explored "the hidden face of this iceberg," according to the statement.

Another prizewinning image strikingly framed a school of rabbitfish — colorful Indonesian reef dwellers — against a backdrop of a vivid turquoise sea transformed into an abstract light show through motion blur. This method combines a fast zoom with a slow shutter speed to create "a Pop-Art like effect," said British photographer Nicholas More, named by UPY judges as British Underwater Photographer of the Year 2020.

"I like how the technique adds dynamism to pictures," More said in a statement.

Some of the UPY contest participants focused their cameras on not only the natural beauty of life underwater, but the plight of marine animals threatened by human activity. The title of Marine Conservation Photographer of the Year 2020 went to Italian photographer Pasquale Vassallo for a dramatic and poignant photo titled "Last Dawn, Last Gasp," showing a tuna species known as the little tunny (Euthynnus alletteratus), its mouth gaping wide as it struggles in a fisherman's net.

Vassallo snapped the image in the Mediterranean Sea off the western coast of Italy, during an early morning dive with several local fisherman, he said in a statement.

You can see all of this year's contest winners in the image gallery on the UPY website.