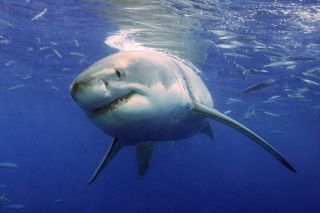 Brought into the spotlight by the "Jaws" movie series and celebrated by the Discovery Channel's Shark Week, great white sharks are among the better-known types of sharks. They can be identified by their gray skin, white bellies, bullet-shaped bodies and rows of up to 300 serrated, triangular teeth.

Great whites are the world's largest predatory fish, according to Discovery. They grow to be about 15 to 20 feet (4.6 to 6.1 meters) or more and can weigh more than 5,000 lbs. (2,268 kilograms). Though massive, the great white is not the biggest shark. This classification goes to the whale shark, which is not considered a predatory fish.

Great whites are found mostly along the coasts of Australia, South Africa, California and the northeastern United States. They are also found in fewer numbers around the Azores, Brazil, the Caribbean, northwestern Africa, eastern Africa, the Seychelles, Madagascar, Mauritius, Sri Lanka, northern Australia, New Caledonia, the Philippines and Hawaii. They prefer warm, salty, temperate coastal seas. The great white can swim not only on the surface, but also more than 820 feet (250 m) deep, according to the International Union for Conservation of Nature's (IUCN) Red List.

Great whites are considered social creatures that travel in a group called a school or a shoal. When one great white wants to take the other's prey, both sharks will display various slapping demonstrations to discourage each other. They try to avoid fighting because just one bite may disable the shark permanently.

Though they are sometimes portrayed as man-eaters, these animals are responsible for just five to 10 attacks per year, according to the BBC. It is believed that when a great white bites a human, it is giving it a "sample bite" and then releasing the human, according to National Geographic.

While in their mother's womb, young great whites swallow their own teeth. According to the Florida Museum of Natural History, they may do this to reutilize calcium and other minerals.

A baby shark is called a pup. When the pup is born, it is 4 to 5 feet (1.2 to 2.5 m) long and completely able to take care of itself. It will immediately swim away from its mother and hunt for small marine animals. Great whites can live up to 70 years.

According to the Integrated Taxonomic Information System (IT IS), the taxonomy of great white sharks is:

According to the IUCN, great white sharks are vulnerable, which generally means they are likely to become endangered unless circumstances improve. Population trends are unknown, according to the IUCN, which says that despite these sharks' high profile, they seem to be "fairly uncommon compared to other widely distributed species." Threats to the great white shark include commercial and sport fishing, degradation of nursing grounds and media campaigns to kill the sharks after a biting incident.

Great white sharks can detect one drop of blood in 25 gallons (100 liters) or water and they can sense even a little blood up to 3 miles (5 km) away, according to National Geographic,. They use their acute sense of smell to detect blood using an organ called the olfactory bulb.

The great white's light body color helps it blend in to the coastal waters it inhabits.

These sharks are very quick swimmers: They can swim at speeds of up to 15 mph (24 km/h), according to National Geographic.

Sharks have a tongue made of cartilage called a basihyal; they use it to sample prey, to see if it is a good idea to eat it or not.

In contrast to most fish, which tend to be cold-blooded, the great white shark is warm-blooded, so it can regulate its own body temperature, thus allowing it to adapt to different water temperatures, according to the Florida Museum of Natural History.