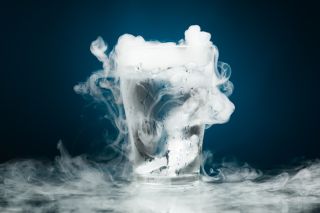 Matter is the "stuff" that makes up the universe — everything that takes up space and has mass is matter.

All matter is made up of atoms, which are in turn made up of protons, neutrons and electrons.

The five phases of matter

There are four natural states of matter: Solids, liquids, gases and plasma. The fifth state is the man-made Bose-Einstein condensates.

In a solid, particles are packed tightly together so they don't move much. The electrons of each atom are constantly in motion, so the atoms have a small vibration, but they are fixed in their position. Because of this, particles in a solid have very low kinetic energy.

Solids have a definite shape, as well as mass and volume, and do not conform to the shape of the container in which they are placed. Solids also have a high density, meaning that the particles are tightly packed together.

In a liquid, the particles are more loosely packed than in a solid and are able to flow around each other, giving the liquid an indefinite shape. Therefore, the liquid will conform to the shape of its container.

Much like solids, liquids (most of which have a lower density than solids) are incredibly difficult to compress.

The Bose-Einstein condensate (BEC) was created by scientists in 1995. Using a combination of lasers and magnets, Eric Cornell and Carl Weiman, scientists at the Joint Institute for Lab Astrophysics (JILA) in Boulder, Colorado, cooled a sample of rubidium to within a few degrees of absolute zero. At this extremely low temperature, molecular motion comes very close to stopping. Since there is almost no kinetic energy being transferred from one atom to another, the atoms begin to clump together. There are no longer thousands of separate atoms, just one "super atom."

A BEC is used to study quantum mechanics on a macroscopic level. Light appears to slow down as it passes through a BEC, allowing scientists to study the particle/wave paradox. A BEC also has many of the properties of a superfluid, or a fluid that flows without friction. BECs are also used to simulate conditions that might exist in black holes.

Going through a phase

When heat is applied to a solid, its particles begin to vibrate faster and move farther apart. When the substance reaches a certain combination of temperature and pressure, its melting point, the solid will begin to melt and turn into a liquid.

When two states of matter, such as solid and liquid, are at the equilibrium temperature and pressure, additional heat added into the system will not cause the overall temperature of the substance to increase until the entire sample reaches the same physical state. For example, when you put ice into a glass of water and leave it out at room temperature, the ice and water will eventually come to the same temperature. As the ice melts from heat coming from the water, it will remain at zero degrees Celsius until the entire ice cube melts before continuing to warm.

When heat is removed from a liquid, its particles slow down and begin to settle in one location within the substance. When the substance reaches a cool enough temperature at a certain pressure, the freezing point, the liquid becomes a solid.

Most liquids contract as they freeze. Water, however, expands when it freezes into ice, causing the molecules to push farther apart and decrease the density, which is why ice floats on top of water.

Adding additional substances, such as salt in water, can alter both the melting and freezing points. For example, adding salt to snow will decrease the temperature that water freezes on roads, making it safer for drivers.

There is also a point, known as the triple point, where solids, liquids and gases all exist simultaneously. Water, for example, exists in all three states at a temperature of 273.16 Kelvin and a pressure of 611.2 pascals.

When a solid is converted directly into a gas without going through a liquid phase, the process is known as sublimation. This may occur either when the temperature of the sample is rapidly increased beyond the boiling point (flash vaporization) or when a substance is "freeze-dried" by cooling it under vacuum conditions so that the water in the substance undergoes sublimation and is removed from the sample. A few volatile substances will undergo sublimation at room temperature and pressure, such as frozen carbon dioxide, or dry ice.

Vaporization is the conversion of a liquid to a gas and can occur through either evaporation or boiling.

Because the particles of a liquid are in constant motion, they frequently collide with each other. Each collision also causes energy to be transferred, and when enough energy is transferred to particles near the surface they may be knocked completely away from the sample as free gas particles. Liquids cool as they evaporate because the energy transferred to surface molecules, which causes their escape, gets carried away with them.

Liquid boils when enough heat is added to a liquid to cause vapor bubbles to form below the surface. This boiling point is the temperature and pressure at which a liquid becomes a gas.

Condensation occurs when a gas loses energy and comes together to form a liquid. For example, water vapor condenses into liquid water.

Deposition occurs when a gas transforms directly into a solid, without going through the liquid phase. Water vapor becomes ice or frost when the air touching a solid, such as a blade of grass, is cooler than the rest of the air.

This article was updated on Aug. 21, 2019, by Live Science Contributor Rachel Ross.