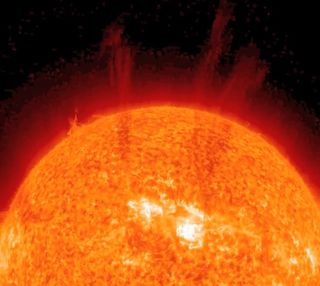 A screenshot of the time-lapse video showing two bands of plasma shooting away from the sun.
(Image: © NASA)

Plasma is a state of matter that is often thought of as a subset of gases, but the two states behave very differently. Like gases, plasmas have no fixed shape or volume, and are less dense than solids or liquids. But unlike ordinary gases, plasmas are made up of atoms in which some or all of the electrons have been stripped away and positively charged nuclei, called ions, roam freely.

"Plasma is a charged gas, with strong Coulomb [or electrostatic] interactions," Hu told Live Science. Atoms or molecules can acquire a positive or negative electrical charge when they gain or lose electrons. This process is called ionization. Plasma makes up the sun and stars, and it is the most common state of matter in the universe as a whole.

(Blood plasma, by the way, is something completely different. It is the liquid portion of blood. It is 92 percent water and constitutes 55 percent of blood volume, according to the American Red Cross.)

Being made of charged particles, plasmas can do things gases cannot, like conduct electricity. And since moving charges make magnetic fields, plasmas also can have them.

In an ordinary gas, all the particles will behave roughly the same way. So if you have gas in a container and let it cool to room temperature, all the molecules inside will, on average, be moving at the same speed, and if you were to measure the speed of lots of individual particles you'd get a distribution curve with lots of them moving near the average and only a few either especially slowly or quickly. That's because in a gas the molecules, like billiard balls, hit each other and transfer energy between them.

That doesn't happen in a plasma, especially in an electric or magnetic field. A magnetic field can create a population of very fast particles, for example. Most plasmas aren't dense enough for particles to collide with one another very often, so the magnetic and electrostatic interactions become more important.

Speaking of electrostatic interactions, because particles in a plasma – the electrons and ions – can interact via electricity and magnetism, they can do so at far greater distances than an ordinary gas. That in turn means waves become more important when discussing what goes on in a plasma. One such wave is called an Alfvén wave, named for Swedish physicist and Nobel laureate Hannes Alfvén. An Alfvén wave happens when the magnetic field in a plasma is disturbed, creating a wave that travels along the field lines. There's no real analogue to this in ordinary gases. It's possible that Alfvén waves are the reason the temperature of the solar corona– also a plasma – is millions of degrees, while on the surface, it is only thousands.

Another characteristic of plasmas is that they can be held in place by magnetic fields. Most fusion power research is focused on doing just that. To create the conditions for fusion, one needs very hot plasma — at millions of degrees. Since no material can contain it, scientists and engineers have turned to magnetic fields to do the job.

One place you can see plasmas in action is in a fluorescent light bulb or neon sign. In those cases a gas (neon for signs) is subjected to a high voltage, and the electrons are either separated from the atoms of the gas or pushed into higher energy levels. The gas inside the bulb becomes a conductive plasma. The excited electrons that drop back into their previous energy levels emit photons – the light we see in a neon sign or fluorescent lamp.

Plasma TVs work in the same way. A gas — usually argon, neon or xenon — is injected into a sealed gap between two glass panels. An electrical current is passed through the gas, which causes it to glow. The plasma excites red, green and blue phosphors, which combine to give off specific colors, according to eBay.

Another use for plasma is in plasma globes, which are full of noble gas mixes that produce the colors of the "lightning" inside them when an electric current ionizes the gas.

Another example of plasma is in the auroras that surround the poles when the sun is particularly active. The solar wind is a stream of charged particles (mostly protons), which hit Earth's magnetic field. Those particles, being charged, follow magnetic field lines and move toward the poles, where they collide with and excite atoms in the air, mostly oxygen and nitrogen. Like a neon sign, the excited oxygen and nitrogen atoms give off light.