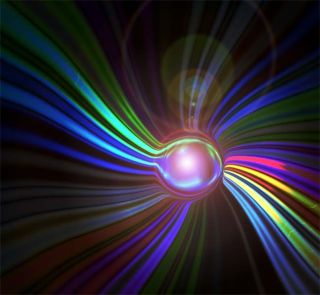 An illustration of a "super-photon" created when physicists turned photons of light into a state of matter called a Bose-Einstein condensate.
(Image: © Jan Klaers, University of Bonn)

A Bose-Einstein condensate is a group of atoms cooled to within a hair of absolute zero. When they reach that temperature the atoms are hardly moving relative to each other; they have almost no free energy to do so. At that point, the atoms begin to clump together, and enter the same energy states. They become identical, from a physical point of view, and the whole group starts behaving as though it were a single atom.

To make a Bose-Einstein condensate, you start with a cloud of diffuse gas. Many experiments start with atoms of rubidium. Then you cool it with lasers, using the beams to take energy away from the atoms. After that, to cool them further, scientists use evaporative cooling. "With a [Bose-Einstein condensate], you start from a disordered state, where kinetic energy is greater than potential energy," said Xuedong Hu, a professor of physics at the University at Buffalo. "You cool it down, but it doesn't form a lattice like a solid."

Instead, the atoms fall into the same quantum states, and can't be distinguished from one another. At that point the atoms start obeying what are called Bose-Einstein statistics, which are usually applied to particles you can't tell apart, such as photons.

Bose-Einstein condensates were first predicted theoretically by Satyendra Nath Bose (1894-1974), an Indian physicist who also discovered the subatomic particle named for him, the boson. Bose was working on statistical problems in quantum mechanics, and sent his ideas to Albert Einstein. Einstein thought them important enough to get them published. As importantly, Einstein saw that Bose's mathematics — later known as Bose-Einstein statistics — could be applied to atoms as well as light.

What the two found was that ordinarily, atoms have to have certain energies — in fact one of the fundamentals of quantum mechanics is that the energy of an atom or other subatomic particle can't be arbitrary. This is why electrons, for example, have discrete "orbitals" that they have to occupy, and why they give off photons of specific wavelengths when they drop from one orbital, or energy level, to another. But cool the atoms to within billionths of a degree of absolute zero and some atoms begin to fall into the same energy level, becoming indistinguishable.

That's why the atoms in a Bose-Einstein condensate behave like "super atoms." When one tries to measure where they are, instead of seeing discrete atoms one sees more of a fuzzy ball.

Other states of matter all follow the Pauli Exclusion Principle, named for physicist Wolfgang Pauli. Pauli (1900-1958) was an Austrian-born Swiss and American theoretical physicist and one of the pioneers of quantum physics.It says that fermions — the kinds of particles that make up matter — can't be in identical quantum states. This is why when two electrons are in the same orbital, their spins have to be opposite so they add up to zero. That in turn is one reason why chemistry works the way it does and one reason atoms can't occupy the same space at the same time. Bose-Einstein condensates break that rule.

Though the theory said such states of matter should exist, it wasn't until 1995 that Eric A. Cornell and Carl E. Wieman, both of the Joint Institute for Lab Astrophysics (JILA) in Boulder, Colorado, and Wolfgang Ketterle, of the Massachusetts Institute of Technology, managed to make one, for which they got the 2001 Nobel Prize in Physics.

In July 2018, an experiment aboard the International Space Station cooled a cloud of rubidium atoms to ten-millionth of a degree above absolute zero, producing a Bose-Einstein condensate in space. The experiment also now holds the record for the coldest object we know of in space, though it isn't yet the coldest thing humanity has ever created.