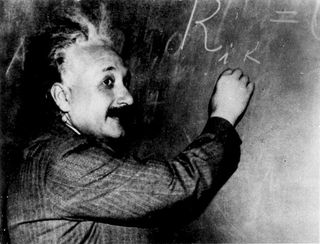 Albert Einstein was one of the one of the most brilliant minds the world has ever seen.
(Image: © NASA)

Albert Einstein was a German-American physicist and probably the most well-known scientist of the 20th century. His theory of relativity, which describes the dynamics of light and extremely massive entities, is one of the pillars of modern physics, alongside his work in quantum mechanics, which focuses on the subatomic realm.

Einstein was born in Ulm, in the German state of Württemberg, on March 14, 1879, according to a biography from the Nobel Prize organization. His family moved to Munich six weeks later, and in 1885, when he was 6 years old, he began attending Petersschule, a Catholic elementary school.

Contrary to popular belief, Einstein was a good student. "Yesterday Albert received his grades, he was again number one, and his report card was brilliant," his mother once wrote to her sister, according to a German website dedicated to Einstein's legacy. But when he later switched to the Luitpold grammar school, young Einstein was not able to cope with the school's authoritarian attitude, and his teacher once said of him, "never will he get anywhere."

In 1896, at age 17, Einstein entered the Swiss Federal Polytechnic School in Zurich to be trained as a teacher in physics and mathematics. A few years later, he gained his diploma and acquired Swiss citizenship but was unable to find a teaching post. So he accepted a position as a technical assistant in the Swiss patent office.

Einstein married Mileva Maric, his longtime love and former student, in 1903. A year prior, they had a child out of wedlock, who was discovered by scholars only in the 1980s, when private letters revealed her existence. The daughter, called Lieserl in the letters, may have been mentally challenged and either died young or was adopted when she was a year old. Einstein had two other children with Maric, Hans Albert and Eduard, born in 1904 and 1910, respectively.

Einstein obtained his Ph.D. in physics in 1905 — a year that's often known as his annus mirabilis ("year of miracles" in Latin), according to the Library of Congress. That year, he published four groundbreaking papers of significant importance in physics.

The first incorporated the newly conceived idea that light could come in discrete particles called photons. This theory describes the photoelectric effect, the concept that underpins modern solar power. The second explained Brownian motion — in which a small bit of dust is seen to move randomly on the surface of water — by pointing out that water is made up of tiny, vibrating molecules that kick the dust back and forth.

The final two outlined his theory of special relativity, which showed how observers moving at different speeds would disagree about many measurements, but would agree about the speed of light, which was a constant. These papers also introduced the equation E = mc^2, showing the equivalence between mass and energy. That finding is perhaps the most widely known aspect of Einstein's work.

In 1915, Einstein published four papers outlining his theory of general relativity, which updated Isaac Newton's laws of gravity by explaining that the force of gravity arose from warps in the fabric of space-time caused by massive objects. The theory was given a major validating boost in 1919, when British astronomer Arthur Eddington observed stars at the edge of the sun during a solar eclipse and was able to show that their light was bent by the sun's gravitational well, causing shifts in their perceived positions.

Einstein divorced Maric in 1919 and soon married his cousin Elsa Löwenthal, with whom he had been in a relationship since 1912. In 1921, he won the Nobel Prize in physics for his work on the photoelectric effect, though the committee members also mentioned his "services to Theoretical Physics" when presenting their award. The decision to give Einstein the award was controversial because the brilliant physicist was a Jew and a pacifist. Anti-Semitism was on the rise and relativity was not yet seen as a proven theory, according to an article from The Guardian.

Einstein was a professor at the University of Berlin for a time but fled Germany with Löwenthal in 1933, during the rise of Adolf Hitler. He renounced his German citizenship and moved to the United States to become a professor of theoretical physics at Princeton, becoming a U.S. citizen in 1940.

During this era, other researchers were creating a revolution by reformulating the rules of the smallest known entities in existence. The laws of quantum mechanics had been worked out by a group led by the Danish physicist Niels Bohr, and Einstein was intimately involved with their efforts.

Bohr and Einstein famously clashed over the latter's qualms regarding quantum mechanics. Bohr and his cohorts proposed that quantum particles behaved according to probabilistic laws, which Einstein found unacceptable, quipping that "God does not play dice with the universe." Bohr's views eventually came to dominate much of contemporary thinking about quantum mechanics.

After he retired in 1945, Einstein spent most of his later years working on a method to unify gravity with electromagnetism in what's known as a unified field theory. The effort stumped the physicist, who died of a burst blood vessel near his heart on April 18, 1955.

Einstein's body was cremated and his ashes were spread in an undisclosed location, according to the American Museum of Natural History. But a doctor performed an unauthorized craniotomy before this and removed and saved Einstein's brain.

The brain has been the subject of many tests over the decades, which suggested that it had extra folding in the gray matter, the site of conscious thinking. In particular, there were more folds in the frontal lobes, which have been tied to abstract thought and planning. However, drawing any conclusions about intelligence based on a single specimen is problematic, according to Eric H. Chudler, a neuroscientist at the University of Washington.

In addition to his incredible legacy regarding relativity and quantum mechanics, Einstein conducted lesser-known research into a refrigeration method that required no motors, moving parts or coolant. He was also a tireless anti-war advocate, helping found the Bulletin of the Atomic Scientists, an organization dedicated to warning the public about the dangers of nuclear weapons.

Einstein's theories concerning relativity have so far held up spectacularly as a predictive models. Astronomers have found that, as the legendary physicist anticipated, the light of distant objects is lensed by massive, closer entities, a phenomenon known as gravitational lensing, which has helped our understanding of the universe's evolution. In 2016, the Advanced LIGO (Laser Interferometer Gravitational-Wave Observatory) also announced the first-ever direct detection of gravitational waves, created when massive neutron stars and black holes merge and generate ripples in the fabric of space-time.