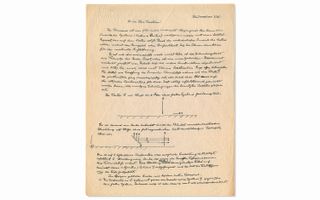 Three letters written by Albert Einstein in 1945 are up for auction and offer an intriguing glimpse into the renowned physicist's criticisms of how scientists were interpreting physics at the quantum level.

The letters, which were addressed to Caltech theoretical physicist Paul Epstein, describe Einstein's qualms about quantum theory, which he called "incomplete" in one letter.

Another letter details the thought experiment that led to a quantum concept known as "spooky action at a distance" — when separated particles behave as if they were linked. [Gallery: See Photos of Einstein's Brain]

The letters — eight pages of German writing and hand-drawn diagrams — will hit the auction block at Christie's in New York today (June 12) at 2 p.m. ET, as part of the "Fine Printed Books and Manuscripts Including Americana" auction.

Einstein's words in the letters demonstrate his fraught relationship with quantum physics, or the theories that describe the world of the very small (atoms and the subatomic particles inside them). For decades, he famously clashed with physicist Niels Bohr, whose views on the workings of the quantum world stated that particles behave differently when they are observed.

This introduced a fundamental element of uncertainty into the behavior of quantum particles; Einstein soundly rejected this perspective. Instead, Einstein argued that the rules for even tiny particles must be consistent whether the particles were observed or not.

Einstein described his "private opinion" of quantum physics in one of the 1945 letters by referencing a phrase that he had already made famous: "God does not play dice with the universe." In the letter, he wrote: "God tirelessly plays dice under laws which he has himself prescribed." This variation clarified his argument that quantum particles must adhere to certain rules that don't change randomly, and that the quantum world required better explanations for particle behavior, according to the item description.

While Einstein admitted in the letter that quantum theory in its present form was "a highly successful experiment," he added that it had been undertaken "with inadequate means." [The 18 Biggest Unsolved Mysteries in Physics]

In another letter written on Nov. 8, 1945, Einstein maps the origins of his thought experiment behind quantum entanglement, using text and diagrams to explain how he first imagined it. Einstein presented this idea in a paper published in 1935; the concept — co-authored with Boris Podolsky and Nathan Rosen — became known as the Einstein-Podolsky-Rosen (EPR) paradox, or spooky action at a distance, according to the American Physical Society.

Einstein and his colleagues meant for this paradox to demonstrate inherent flaws in perceptions of the quantum world. When Epstein responded to Einstein's Nov. 8 letter with skepticism, Einstein reworked the EPR paradox, sending another version of the thought experiment in a letter dated Nov. 28, 1945.

He concluded the letter by reiterating his long-held criticism of the idea that the quantum realm couldn't be described definitively, saying "it is this view against which my instinct revolts."

However, recent experiments have suggested that despite Einstein's protestations, the behavior of particles at the quantum level is likely influenced by randomness after all.

Together, the letters are expected to fetch more than $200,000 at the auction, according to the Christie's website.